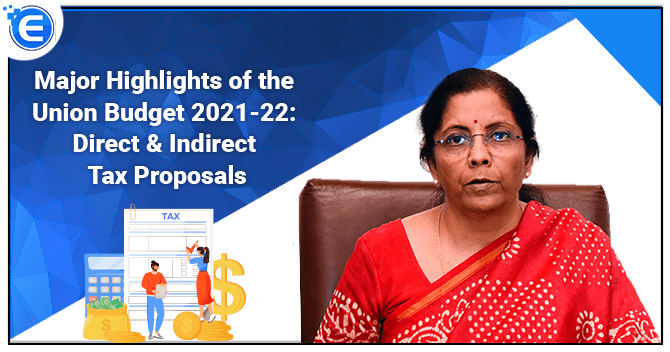 The Union Minister for Finance and Corporate Affairs, Nirmala Sitharaman, unveiled the Union budget 2021-22. It is the first budget of this decade, and it’s also a digital one. In this article, we shall look at the major highlights of this budget comprising of Direct and Indirect tax proposals proposed by the Finance Minister.

Laying a vision for Atmanirbhar Bharat, the finance minister stated that the budget is an expression of Indians who have full confidence in their capabilities and skills. She further stated that the budget is expected to strengthen the Sankalp of nation first, doubling the income of farmers, healthy India, good governance, education for all, opportunities for youth, women empowerment, and inclusive development.

The Union budget 2021-22 focuses on six pillars for reviving the economy:

This part has been discussed in another part of this article. You are advised to go through it for detailed information.

The budget outlay for Health and well being is estimated to be 2,23, 846 crore rupees for FY 2021-22. The increased allocation might just expand and further strengthen the existing national health institutions, health emergency operation centres, and mobile hospitals.

Another key highlight to take note was the increase in FDI limits in the insurance sector. The limit was raised from 49% to 74%. The government is contemplating to divest two PSUs and insurance company.

The Finance Minister asserted the intentions of the government to simplify the tax administration, litigation management and ease the compliance of direct tax administration.  There were certain direct tax proposals that were introduced. The individual and corporate tax rates were not changed.

In a significant move, the limit for tax audits has been increased to 10 crore rupees from the existing 5 crore rupees. It has come as a relief for many corporate houses.

Let’s now take a look at other amendments proposed in Union Budget 2021-22:

Those assessed with a taxable income of up to 50 lakh rupees and any disputed income of 10 lakh rupees may approach the Dispute Resolution Committee which would help in preventing new disputes.

A provision has been made for faceless proceedings before the Income tax appellate tribunal in a jurisdiction-less way, which will help in reducing compliance cost for taxpayers and increase transparency in the disposal of appeals.

The tax holiday for start-ups is extended for one more year that means up to March 31, 2022.

Pre-filing returns shall be permitted for salary, payment of tax, etc. The details of capital gains from listed securities etc., shall be prefilled.

The advance tax shall now be applicable on dividend income after its declaration. Tax holidays have been proposed for aircraft leasing and rental companies.

Where the PF contribution of an employee was deducted but the same was not deposited by the employer, it will not be allowed as a deduction for the employer.

Further, section 44 ADA, which applied to assessees being residents in India, will now apply to the resident individual, Hindu undivided family, or a partnership firm other than an LLP.

In the case of indirect tax proposals, the Finance Minister claimed that record GST collections have been made in the past few months. She stated that many steps have been taken to simplify GST. Deep analytics and artificial intelligence have been deployed to identify tax evaders and fake billers.

Let’s now take a look at other major announcements under Indirect Tax Proposals:

The Finance Minister confidently stated that the government is prepared to support and facilitate the economy’s reset and that the Union Budget[1] 2021-22 provides an opportunity for the economy of India to raise and capture the pace that it requires for sustainable growth.

An Overview of New Legacy of Disput...

On the 5th day of July 2019, Finance Minister of India Ms. Nirmala Sitharaman during her maiden...

Meaning Reduction of share capital is defined as the reduction of issued, subscribed and paid-u...