Tussle between ED and TMC MP in the coal scam case 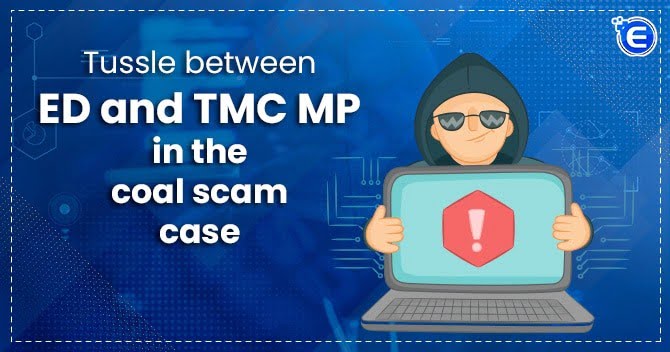 The Enforcement Directorate took up the case of the West Bengal coal scam case in the year 2021. The case is investigated in parallel by the Enforcement Directorate (ED) and the Central Bureau of India (CBI). In November 2020, CBI lodged an FIR alleging that the coal scam had been committed in mines of West Bengal’s Kunustoria and Knajora (the area around Asansol). And acting upon the same, ED files a case under the Prevention of Money Laundering Act. Anup Majhi, a local coal operative, was made prime suspect in this coal scam. ED also claimed that Abhishek Banerjee, TMC MP and nephew of Mamta Banerjee, Chief Minister of West Bengal, was a prominent beneficiary of all the funds obtained by this coal scam but denied these allegations.

The alleged coal scam came into the limelight when West Bengal CBI lodged an FIR on 27th November 2020 against so many ministers of TMC, then ruling party and other government officials of West Bengal in the matter of money laundering and other offences under the Indian Penal Code[1] and Prevention of Money Laundering Act. Later, the ED took up the whole matter of coal scam at mining near Asansol. ED revealed that a large number of crimes were committed and laundered in illegal coal mining near railway areas. ED claimed that the total worth of the West Bengal Coal scam is Rs 1352 crores.

In the same case, CBI informed that this coal scam had been going on for several years. The illegally mined coal was sold in black markets illegally by the rocket operating in the Eastern coalfields Limited. In 2021 February, CBI was stopped from investigating the illegal coal mining, but later the Calcutta High Court allowed CBI to continue the investigation.

Anup Majhi alias Lala, a local coal operative, was made prime suspect in this coal scam. CBI has conducted raids on his properties or hideouts as he is hiding somewhere to avoid the investigation. Another prime suspect Vinay Mishra is also elusive, and CBI conducted raids at his properties too but failed to locate him. ED also claimed that the TMC MP, Abhishek Banerjee was the beneficiary of all the funds for the illegal transportation of coals, but he denied all the allegations made by ED against him.

The tussle has been going on between ED and the TMC MP Abhishek Banerjee since the moment when ED alleged him to be the beneficiary of the illegal transportation of the Coal scam. In March 2022, ED issued a fresh summon in the name of Abhishek Banerjee and his wife Rujira Banerjee in the case related to the coal scam committed in West Bengal. The ED asked Mr Banerjee to appear before it on 21st March of this year and his wife to appear on the next day before it. This summons was issued after the order passed by Delhi High Court in a matter where the couple challenged the earlier summon issued by ED on 10th September 2021, where ED asked them to appear at its office in New Delhi. According to the couple, they could not come to Delhi as they resided in Kolkata, but the court dismissed their plea and allowed the ED to continue the investigation. They have filed another plea in the Supreme Court challenging the decision of the Delhi High Court. In September 2021, Abhishek Banerjee was questioned by the ED, and the notice was also issued to his wife, but she did not come to New Delhi for questioning, citing the increase of COVID-19 cases. On 6th September 2021, ED questioned Mr Banerjee in New Delhi for about 9 hours, then again in March 2022, he was questioned by ED for 8 hours. And after the end of the questioning and interrogation by ED, Abhishek Banerjee said that his wife could not come to Delhi for questioning cause she had a baby. And if one wants to question her, then it can go to Kolkata.

All these questioning by ED is recorded under the Prevention of Money Laundering Act.

ED had identified two companies as participants in the coal scam, namely Leaps and Bound Limited and Leaps and Bond Management Services, LLP.

ED had also arrested two people in connection with the Coal scam. One of them was Vijay Mishra, brother of Vinay Mishra, a young TMC leader. Another arrest was of the former inspector in charge of Bankura district Police Station, Ashok Kumar Mishra.

ED, before this arrest, claimed that the Mishra brothers had received a worth Rs 730 crores on behalf of some powerful people and for themselves too, in case of a coal scam.

ED filed its chargesheet related to the coal scam in the month of May 2021. In the Chargesheet, ED mentioned that the money was collected by Vinay Mishra and his close associates for his powerful political bosses in the TMC. ED also stated that Vinay, the young TMC leader, is also very close to Abhishek Banerjee.

ED further claimed that the seized documents show that Anup Majhi assisted in transferring all the funds acquired from the coal scam to Abhishek Banerjee and his close relatives like his wife, sister-in-law, brother-in-law, etc., in London and Thailand.

ED also told the court that Majhi was able to run all his unlawful coal mining businesses because of the assistance of Inspector Ashok Kumar Mishra.

In the early 2022s, ED has attached over Rs 345 acres of land worth Rs 445 crores in a company connected to a coal scam.

The West Bengal coal scam is our country’s most recent scandal/fraud. ED and CBI are now under investigation; both government agencies are investigating the matter parallelly. The investigation and questioning by these agencies in connection with this coal scam are still going on. The ED is also trying to attach properties to release the funds of the scam. Till now, ED has attached the property worth 445 crores out of 1352 crores of the total amount of this recent coal scam.

Read Our Article: A look at some of the biggest Financial Scams in India

Section 45 of PMLA applies to those...

A recent order of the Delhi Court, while deciding the question related to regular bail applicat...

Bail signifies the judicial release of an accused charged with certain offences. The grant of...