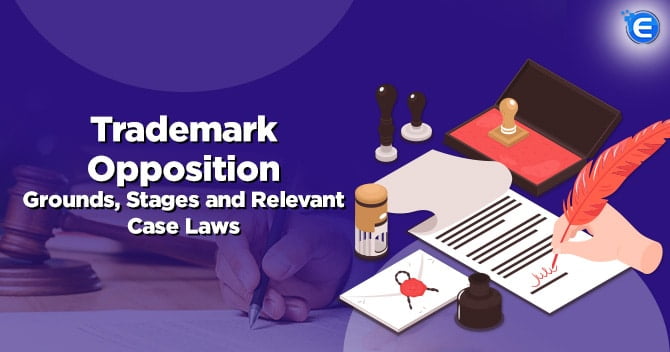 Who Can File For Trademark Opposition?

Any person can file the notice of opposition which includes:

Also, the two or more persons who have the same issues against a trademark can be joined together as opponents and file for the opposition.

How to File Notice of Opposition Online

Time Limit for Filing an Opposition

According to section 21 clause 1 of Trademarks Act, 1999, any person may, within four months from the date of the advertisement or re-advertisement of an application for registration, give notice in writing in the prescribed manner and on payment of such fee as may be prescribed, to the registrar, of opposition to the filling.

When the registrar reviews your application for trademark and finds that it qualifies for registration and has not been objected by the Trademark Examiner or if there was an objection raised by the department which has overcome, then in the next step your trademark gets published in the Trademarks Journal. The purpose behind publishing a Trademark in the Journal is to enable the public to view the trademark and submit an opposition against it. When an opponent files an opposition, the respective trademark status is marked as ‘Opposed’.

Some of the grounds on the basis of which a person may file for Opposition Proceedings are listed below:

The steps which are involved in the procedure of Trademark Opposition are as follows:

Notice of Opposition: Any person can file for notice of opposition that is published in the trademark journal within four months from the date of broadcast.

Counter-Statement:  The applicant or the agent within two months of the acknowledgement of the notice of opposition can file for counter-statement. In case the counter-statement is not filed within the prescribed time, it will be deemed that the applicant has abandoned the Trademark application.

Hearing: Upon the notice of opposition, counter-statement is filed with all the evidence, then, the Registrar shall call the applicant for a hearing, and the matter will be decided upon merits.

In Parle Products (P) LTD. v J.P. And Co. [1972], the plaintiff was a manufacturer of biscuits and confectionery and was the owner of certain registered trademarks. The word “Gluco” was used on their wrapper with its colour scheme, general set up and collocation of names registered under the Trade Marks Act, 1940. This wrapper is used in connection with the sale of their biscuits known as “Parle’s Gluco Biscuits” printed on the wrapper. The wrapper is of buff colour and depicts a farmyard with a girl in the centre carrying a pail of water and cows and hens around her on the background of a farmyard house and trees.

The plaintiffs claim that they have been selling their biscuits on an extensive scale for many years past under the said trademark, which acquired great reputation and goodwill among the public. They claimed to have discovered in March 1961, that the defendants were manufacturing, selling and offering for sale biscuits in a wrapper which according to them was deceptively similar to their registered trademark. The plaintiffs assert that this act of the defendant constitutes an infringement of their trademark rights.

In the present case, the court held that the packets are practical of the same size, the colour scheme of the two wrappers is almost the same; the design on both though not identical bears such a close resemblance that one can easily be mistaken for the other. The essential features of both are that there is a girl with one arm raised and carrying something in the other with a cow or cows near her and hens or chickens in the foreground. In the background, there is a farmhouse with a fence. The word “Gluco Biscuits” in one and “Glucose Biscuits” on the other occupy a prominent place at the top with a good deal of similarity between the two writings. Anyone in our opinion who has a look at one of the packets today may easily mistake the other. An ordinary purchaser is not gifted with the powers of observation of a Sherlock Holmes. We have therefore no doubt that the defendant’s wrapper is deceptively similar to the plaintiffs which were registered. Thus the court held that the defendant had infringed the registered trademark of the plaintiffs.

In Banga Watch Co. v N.V. Philips, (1983),  the respondent instituted an action against the appellants to restrain them from using the name of ‘Philips’ on watches, clocks, etc. to pass off their goods as those of the plaintiffs. The respondent company is engaged under the trademark “Philips” in the manufacturing of a wide range of electrical and non-electrical goods, e.g. radios, lighting products, refrigerators, medical apparatus, darkroom timers, multiple electric clocks and timers. The appellants-defendants are carrying on business in the sale of watches, clocks, etc. under the trademark “Philips” since 1954.

In the present case, the court held that based on the facts the trademark “Philips” to the knowledge of a common man was associated with the products of the plaintiffs and that watches or clocks bearing the said name would lead an ordinary customer to believe that it was their product. The defendants are, thus, restrained from using the said trademark.

Solution to Notice of Opposition

How to file Trademark Objection Rep...

We Indian people don’t like any kind of objection in our life and this is the matter of trade...

Synopsis of issues and Suggestion u...

Hey, we know the topic quite seems boring but trust me it is not. Today in this article we will...

With the advent of globalization and economic development from 1992 it has been seen that new b...