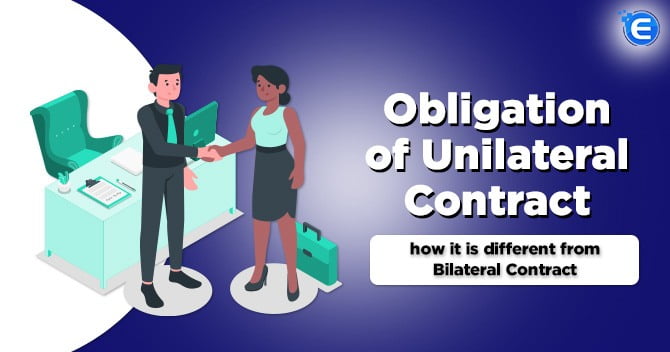 The obligation under Unilateral Contracts

Insurance Contracts: In an insurance contract, if their property is lost or damaged, the insurer offers to compensate people in a specified way. The customer makes very few legally enforceable promises, and normally his responsibility is limited to paying the premiums. In case the property is damaged, and the insurance company refuses to compensate the customer, then customers can sue for breach of the contract, whereas the insurance company cannot sue its customer generally.

One-Sided: The main characteristic of a unilateral contract is that only one party to the contract makes a promise. And the other party is not obligated to fulfill that contract. For example, J asks K to take her car to the repair shop. She promises to pay K Rs.200 if he takes her car. If he does not take her car, then she is not obligated to pay him, but if he takes the car to the repair shop, then she is obligated to pay the Rs.200 to fulfill as a promise.

Breach of Contract: There is no generally breach of contract in the case of unilateral contracts as no promise is made by both the parties. But it can be breached when the offeree, performs certain action and in return, no part promise is completed by the offeror then offeree can sue for breach of contract. Breaching a unilateral contract can be enforced by bringing a lawsuit. In case of a lawsuit, the aggrieved party has to prove that the contract existed between both parties, and the person who made the offer is only responsible for not performing his part of the promise, and the other person got suffered a loss in the contract.

Rewards and Contests: Many unilateral contracts are based in the form of rewards and contests. For example, an advertisement agency makes an announcement to award a person who found the lost car of the owner. The person accepts the announcement as an offer and founds the car of the owner. In this case, a unilateral contract is made by the owner through an agency. The person who has found the car needs to be awarded by the owner. If there was no one who has found the car, then the agreement becomes void.

There are basic elements that are required to be made to make the contract legally binding upon both parties. A contract is legally enforceable; if all these elements are exist

Agreement: The one party needs to present an offer to another party. Both parties may negotiate until the other accepts the offer. While making an agreement, there must be no coercion or duress from either of the side. A contract becomes void if it is found that one party’s ability to agree was compromised. An example is where a small business agrees to the terms of a contract after being pressurized to do so by a bigger company.

Consideration: There is a need to pay the price or liability paid against the promise made. A contract cannot be enforceable if there is no exchange of any consideration from both sides. However, consideration is not required to be in monetary form. For example, if one is selling the car, he can accept shareholdings or other property of the purchaser as payment. This will be considered as a consideration.

Intention to create legal relations: There has to be an intention for entering into the contract, which later will be legally binding. Each party to the contract should understand what they’re signing up to and what their legal obligations will be upon signing the contract. If the terms of the contract are unclear, one should not sign before seeking legal advice.

Certainty: The contract must be sufficiently clear and complete. The fundamental backbone is an agreement in the contract. It consists of an offer by one party and acceptance by the other. The unilateral contracts are unique is the way in which an agreement is formed after the performance of other parties. These contracts are not always accepted by signing, but by performing a particular action.

Differences between Unilateral and Bilateral Contracts

Most people know about a bilateral contract, which means when two or more parties mutually entered into a beneficial agreement. In contrast to it, unilateral contracts are one-sided and rely upon the wish of the other party activities. It means that one party accepts all the terms of another, but this does not work in reverse. The following are more differences:

Both unilateral and bilateral are two different types of contracts. The unilateral agreement is one-sided, and therefore it is less preferred except in the cases of advertisements and lost and found goods. Its enforcement becomes different as no establish act defines the unilateral contract. On the contrary, the bilateral contract is formally made and is useful as both parties agree on terms at the same time. It can be easily enforced by the law made in the act.

Format for Release from Liability f...

An Independent Contractor Agreement is executed between an independent contractor and the hirin...

Sample Format of Power of Attorney...

Power of Attorney is a legally binding document which gives another person, the authority to ac...