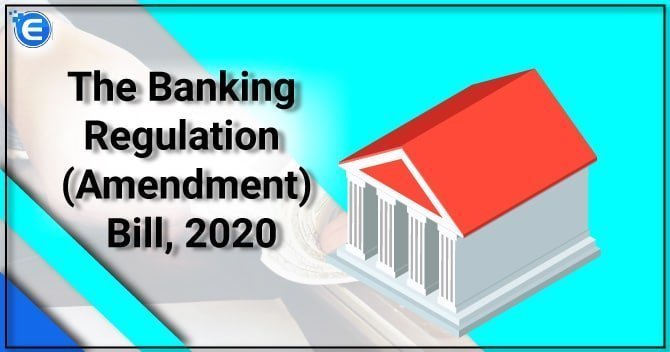 The new banking regulation bill of 2020 amends the banking regulation act, 1949. This act standardizes the functioning of the banks and further provides details on the many aspects such as management, licensing and operation of banks. Moreover, this bill allows the Central Bank of India i.e. the RBI to launch a scheme of amalgamation and reconstruction of the bank without placing it under any form of freeze. These changes do not affect any existing powers of the state registrar of the co-operative societies.

Which Bill does this Banking Regulation Repeal?

The new Baking regulation (amendment) ordinance, 2020 repeal the older regulation that was promulgated on June 26, 2020.

The Cooperative banks are kept away from the provision of the Banking Regulation act with respect to the conditions mentioned on qualification and amendment of the board of directors and chairman. Furthermore, the bill provides that the cooperative banks cannot employ any person as their chairman, who has been convicted for a crime that involves moral turpitude, or someone who is insolvent and some other restrictions. It also empowers the RBI to work as a regulator and remove any chairman if he is not deemed fit for the role and appoint some other suitable person.

The bill also presents that the board of directors shall not have less than 51% of members who have obtained practical experience or special knowledge which includes law, economics, banking, and accountancy.

Under the Banking Regulation Act, the Reserve bank of India is empowered to issue an ordinance to succeed the Board of Directors of the cooperative bank for a period not more than five years and further appoint an Administer. The Bill expands the authority of the Reserve bank of India to supersede all the cooperative banks. In the matter where the bank is registered under RCS, the reserve bank will issue the offer in discussion with the respective state government.

Under the banking regulation bill, the provision relations to the audit of the cooperative banks are conducted on par of scheduled commercial banks. The accounts of the cooperative banks will be conducted by the qualified person and also, the approval of the RBI just before the appointment and re-appointment or removing of the auditor. The RBI has discretion to order an audit for such a period and transaction as mentioned in the order.

The cooperative banks are barred from the conditions on the issuance of the shares and securities under the banking regulation Act. Other banks are permitted to issue preference shares and equity. The voting right is generally allotted on the basis of one vote one share. This Act compels the ceiling of 15% on the voting rights employ by the equity share holders.

Scheme of amalgamation and reconstruction without cessation under Banking Regulation

Under the Banking Regulation Act, the Reserve Bank of India shall, after placing a bank under a moratorium, organize a scheme of amalgamation and reconstruction of the Bank. This shall be done to maintain proper management of the bank, or for the interest of the banking system, the general public and the depositors. The placed under this cessation are free from any legal action for a period of 6 months. Moreover, the banks cannot make any discharge of any liability or payment during the moratorium. This banking regulation bill facilitates the Reserve bank of India to initiate a scheme of amalgamation or reconstruction of a bank with devoid of striking a moratorium.

It is now clear that the main aim to bring this regulation was to bring the cooperative banks under the administration of the Reserve Bank of India. The reason to bring this amendment is to heal the deteriorating condition of cooperative banking in India. Furthermore, with these new amendments RBI will now be able to undertake the scheme of reconstruction and amalgamation of the banks without putting them under cessation. Overall, it will help the whole banking system, the interest of the public, all the account holders of the bank and the management of the banking company.

Is a contract possible without offer, acceptance or consideration? If we look at today’s worl...

A Step by Step Guide for Cheque Bou...

Before coming to the cheque bounce notice, let’s get to know the basics of the “cheque” a...