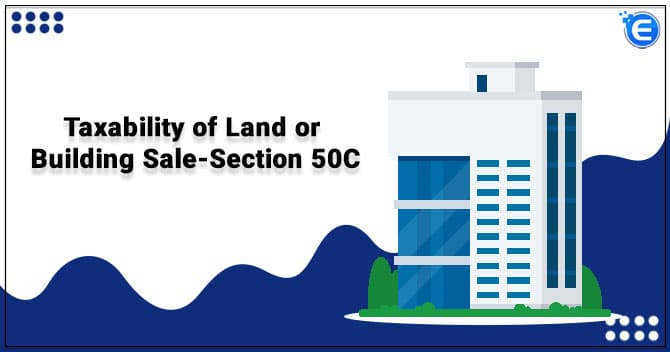 Due to the large population of India, there has always been massive demand for real estate. Therefore it is imperative to know the aspects relating to taxability of its sale. In this article, we shall discuss taxability of land or building sale.

Income tax law classified income to 5 categories for taxation. Under this come Capital Gains. Capital gains means income on sale of any capital asset in the hands of seller. Capital asset has been defined to include different assets, including real estate. Hence, any gain on the sale of land or building by the owner is taxed as capital gain. Sale consideration reduced by cost of acquisition is taxable as capital gain.

Just as any other tax provision, there were tax evasion measures employed by parties to the transaction in capital gain taxation of land or building also. People started understanding the importance of properties in the sale agreement and paying substantial part of consideration in cash to reduce tax liability in the hands of seller, which led to the loss to the government and unaccounted black money in the society. To curb such large scale undervaluation of real estate and to bring unaccounted money to tax net, government introduced Section 50C by Finance Act, 2002[1].

However, budget 2018 brought an amendment in Section 50C where no adjustments would be made in case where the variation between stamp duty value and the sale consideration is not beyond 5% of the sale consideration. It has been introduced to minimize hardship in genuine transactions in the real estate sector.

What happens in case the selling price is lower than the value adopted by Stamp Valuation Authority?

There can be different reasons for the parties to have transaction of sale of land or building for a consideration lower than the value adopted by the Stamp Valuation Authority, but Section 50 C provides protection only against fluctuation in the property value caused by considerable gap among different stages of sale transaction.

There have been litigations in the past in cases where the asset value on the date of agreement to sell and actual sale differs because of the economic factors like demand and supply. In that case, considering the value adopted by Stamp Valuation Authority as sale consideration may cause difficulty to taxpayers by causing them to pay tax on something that’s never received.

To remove this issue in the law, the Finance Act of 2016 amended 50C Section. According to the amendment, if the agreement date fixing the sale consideration and actual date of registration of sale of land/building are not same, value adopted by the Stamp Valuation Authority as on the date of agreement may be taken as sale consideration.

However, to avail this benefit, a part of sale consideration is obtained through account payee cheque or bank draft or ECS on or before the date of agreement of transfer. This amendment comes as a relief to taxpayers involved in the sale of land and building as negotiations consume a lot of time.

Taxability of land or building sale: Seller not accepting the value adopted by Stamp Valuation Authority

However, it makes a big difference to the seller as it impacts income tax which could be significant based on the value.

As it’s a matter of income tax for the seller, he is allowed to question the value adopted by Stamp Valuation Authority and claim the value is more than the FMV under Section 50C before the income tax authorities.

Updates About TDS on Cash Transacti...

The Central Board of Direct Taxes (CBDT)[1] in its recent notification announced that aforesaid...

Secretarial Audit is a compliance audit. It is a part of total compliance management in an orga...