Significance of NBFC Registration in the Indian Financial Market 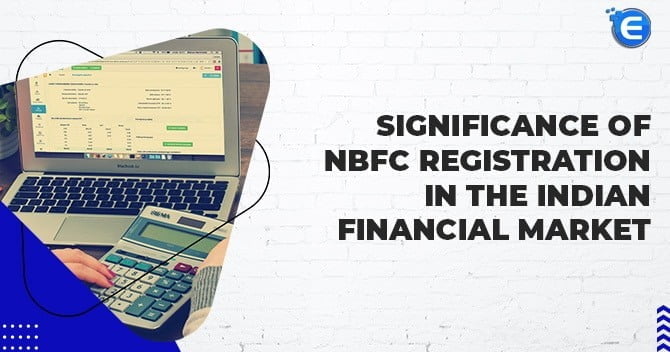 There have been occasions when people who are new to Indian Financial Market wonder what is the need for NBFC Registration. It may be due to the fact that they are still new to the market and thus fail to understand its significance. In case you are wondering the answer to this question, then you are in the right place. In this article, we have discussed the significance of NBFC Registration in the Indian Financial market.

There were also instances where small business owners and farmers fell into the debt trap of these lenders. In the last two decade or so, the administration and the regulatory body realized the need for inclusion of large part of the population in the financial market to induce financial growth. Thus, regulation of the lending market was initiated.

This included companies having medium level of capitals to be registered as a Non-Banking Financial Company (NBFC) and other low income companies as Micro-Financing Institutions (MFIs).

However, the Registrar of Companies lacked the required workforce to keep a check on the functioning of these institutions and to audit their yearly activities. Therefore in order to streamline the functioning, RBI was given the task. The licensing process, registration process and regulation of NBFC and analysis of yearly financial report and accounts came under the RBI.

The Reserve Bank is responsible for regulation of the NBFC Registration process by ensuring that the company satisfies the norms and the eligibility set for qualification. It set a lower level of capital requirement that a company should have if they seek an NBFC license. The process of documentation includes analysis of the company’s records or the records of the promoters to ensure that the institution is capable enough to handle the business.

Overall the RBI scrutinizes an application for NBFC Registration thoroughly, and this has caused many to seek the assistance from a financial and legal advisory entities for seamlessly apply for such registration.

NBFCs have played a pivotal role in revolutionizing the Indian Financial Market and the Indian economy. Its major role is discussed below.

The NBFC has competed well with the banking sector in contributing to the economy. Despite slowdown experienced in the economy, NBFCs have enhanced operations and is still growing at a fair rate.

NBFCs have been more profitable sector than the banking sector due to lower costs. This has allowed them to extend cheaper credit to customers.

With the public preferring to deposit in the NBFCs, they allow mobilization of resources, funds and capitals. They turn savings into investment and contribute to the economic development.

The significance of NBFC registration can also be understood by the fact that they are flexible in lending, and it helps them to become more proactive in innovating financial products. It brings about growth in a grand manner.

These points above echo the significance of NBFC registration and speak volumes of the essential role that it has played in the Indian Financial Market.

Assistance of a Financial and Legal Advisory Firm

Promoters of companies have been seeking to start an NBFC business through the help of a legal and financial advisory firm. This makes sense as it will help their application to sail through the process of registration. The RBI conducts strict check on the company and its promoters therefore hiring a legal firm can streamline the entire rigorous process. These legal experts file the documents and also follow up with RBI on Company’s behalf. This allows promoters to focus on other vital aspects of NBFCs, such as planning the way forward.

The significance of NBFC registration in the Indian financial market can be determined from the points mentioned above. Their future looks bright with excellent growth prospects. Their value is only going to go up from here on.

What is the Process Change in Name...

Instances have been brought to the notice that some of NBFCs are changing their name, more part...

In the present scenario the loans extended by the NBFCs to MSMEs grew rapidly and the experienc...