Set Off and Carry Forward of Losses 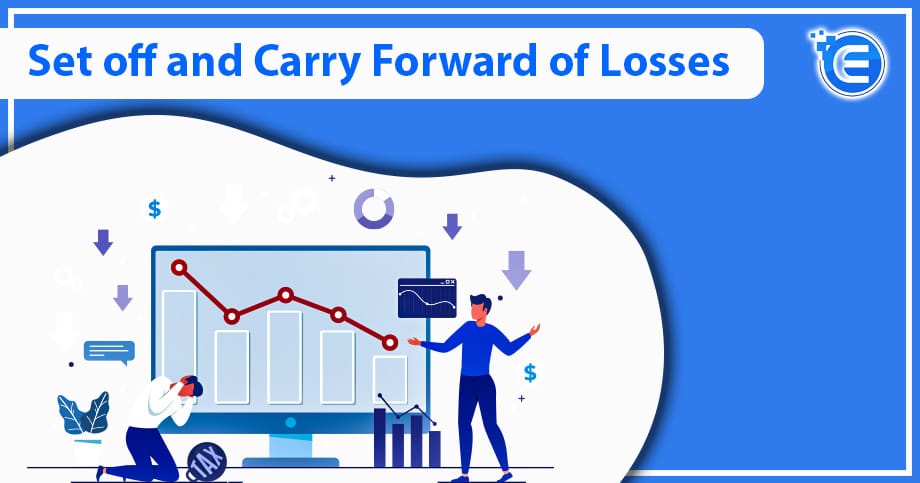 Profit and loss are two sides of a coin. However, incurring losses can be demoralizing for the business, but the Indian Income-tax law does provide taxpayers with some benefits from incurring losses too. The provisions regarding set off and carry forward of Losses, along with the exemptions pertaining to the adjustments, are provided in the income tax Act 1961[1], which are discussed in detail in this article.

Set off and Carry Forward of Loss: Definition

The definition of both the terms is provided herein under –

Set off of Losses

Subsequent to making the intra-head adjustment (if any), the  further step is making an inter-head adjustment which means that if the taxpayer has incurred a loss under one income head and is having income under other head of income in any year, the loss can be adjusted from one head against income from other head.

Even after making the appropriate and permissible intra-head and inter-head adjustments, there can still be unadjusted losses, which can be carried forward to future years for adjustments against the income of these years. The rules regarding carry forward differ slightly for different heads of income.

Restrictions to Be Considered During Intra-Head Adjustment of Loss

The following restrictions should be kept in mind before making intra-head adjustments of loss:

Restrictions Regarding Inter-Head Adjustment of Loss

The below-mentioned restrictions must be kept in mind before making inter-head adjustment:

Apart from this, the following can also be carried forward indefinitely despite not being business losses as per Income-Tax Act:

Change in the Constitution of Business:

In the event of a change in the constitution of a partnership firm owing to the death or retirement of a partner, the share of loss attributable to the outgoing partner can’t be carried forward by the firm. However, this does not apply in regard to unabsorbed depreciation, family planning expenditure or unabsorbed capital expenditure on scientific research.

Change in Shareholding of Certain Companies

Order of Set-Off Of Business Losses from Business Income:

The effect of depreciation, business loss and investment allowance must be provided in the below-mentioned order:

As per the provisions of the Act, Only, the assessee incurring the loss, is entitled to carry forward or set off the loss. However, there are certain exceptions to it:

There are different provisions with regard to set off and carry forward of losses, wherein the loss must be the first set off within the respective head in the same AY, followed by inter head set off if the loss exists even after the previous adjustment. Upon the completion of the steps mentioned above, if any loss subsists, it should be carried forward, making it eligible for set off in the next AY under the same income head only, not before considering the prescribed exemptions. Therefore, a clear understanding of the act’s provisions is necessary while dealing with business losses.

Read Our Article: A Brief Overview on Profit Margin

The ability to respond to new customer needs and to seize market opportunities as and when they...

Fraud can be of 2 types- fraudulent financial reporting and misappropriation of assets. You may...

The article provides a complete guideline to Jeevan Pramaan Online. This a great benefit to the...