Restoration of a Lapsed Patent 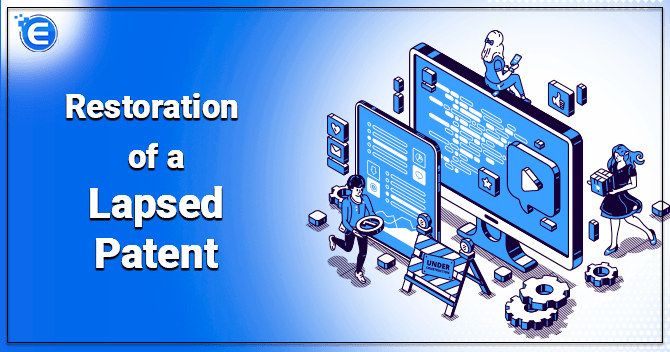 A patent is granted for a period of 20 years considered from the date of filing of the patent. According to the Indian Patent Act[1], the patentee has to pay renewal fees up to the date of possession stated by the patent office. In case of the renewal/maintenance fees are not paid by the patent holder within the given time frame as prescribed by the Patent and Trademark Office, the patent will lapse. Here we will discuss restoration of a lapsed patent.

What is a Lapsed Patent?

The renewal fee is payable as mentioned before the expiration date. Thus, it can be said that the renewal fee has to be paid before the start of every succeeding year. However, it may be noted that this period can be made extendable by six months by requesting an extension of time during the pendency of the application for patent or if the patent has been granted after the expiry period of two years from the date of filing,

The renewal fee should be paid within a period of three months of the date of recording in Patent Registration or within an extended period but not later than a period of nine months from the recording date.

Patents Act provides definite safeguards for restoring a lapsed patent. Consequently, a patent that has stopped to have an effect because of payment failure the agreed fees in the permitted period under the Act or within such a time, permitted under the Act.

The patentee of his legal representative may produce an application in the manner prescribed for the elapsed patent’s restoration. In case where the patent was being held by two or more persons jointly then with the Controller’s leave, one or more of them without joining by others, may submit the application for restoration within a period of eighteen months from the date the patent has ceased to be effective.

Though the renewal fees can be paid by any other person, the application for the restoration of the lapsed patent, the application has to be made mandatorily by the patentee or any of his appointed legal representatives.

Forms Used for Application of Restoration of Lapsed Patent

Form 15 is needed to be filled along with prescribed fees. Also, evidences must be submitted clarifying that the non-payment of renewal fee was purely unintentional.

Grounds for Opposition of Restoration of Lapsed Patent

In the event the request from the applicant for hearing within the permitted time is approved and the Controller after allotting the applicant’s hearing is satisfied on a prima facie basis that the applicant’s failure to pay fees for renewal is unintentional, he shall file for Opposition in Restoration.

It is observed that at any time within the period of two months from the publication date of the applicant, any interested person can give notice of opposition in the prescribed Form.

A copy of notice related to the opposition shall be delivered to the applicant by the controller.

When a decision in favor of the applicant has been made by the controller, the applicant can proceed to pay the unpaid renewal and additional fees according to the specifications of the First Schedule, within a month’s time from the date of the Controller’s Order permitting the application for restoration.

Rights of a patentee of lapsed patent that has been restored

The rights of the patentee shall be subject to provisions prescribed by the Patent controller in his order and to other provisions which he thinks appropriate to enforce for the protection of compensation of person who may have begin to avail them from the patent invention.

It may be noted that the patentee loses their right and the invention becomes a matter of public property as soon as the patent is lapsed due to non payment of patent renewal fee.

The restoration of a lapsed patent consists of quite a few verdicts that must be taken by the Patent controller. Therefore the patentees should be attentive regarding the deadlines of patent. The process of restoration might take some time. Consult a professional to have a better understanding of the same.

Read our article: All You Need to Know About Intellectual Property Rights

What is Patent and why Patent Regis...

In India the importance of Patents has increased very rapidly over the last few years. It is ev...

The Importance of a Provisional Pat...

A provisional patent is a type of legal document which is filed under the United States Patent...

How to Do Patent Search and how is...

In this article, we will discuss the relevance of Patent search Filing of the application proce...