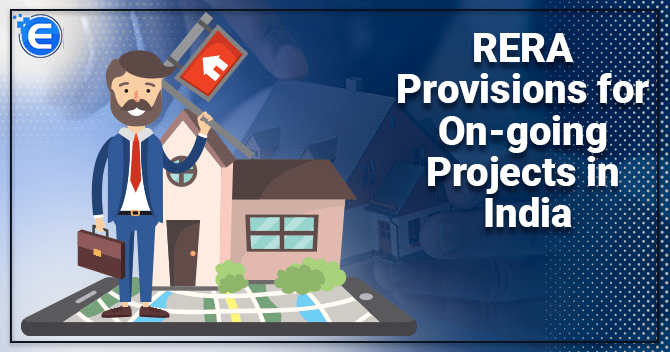 There has been a rapid increase in the developers, builder, and promoters who after the initial steps of attracting the customers and home buyers were ignoring the concerns of such buyers. And the complaints of such buyers were going unheard. Therefore there was a need for regulation of the Real estate sector.

We all know the Real Estate (Regulation and Development) Act, 2016[1] was fully implemented from 1st May 2016. The primary objective behind the introduction of RERA Registration was to organize the real estate sector, boost investment and protect the home buyers and investors. Among all these reasons, safeguarding the buyers is the main objective of its introduction. In this article, we will discuss RERA Provisions for ongoing projects in India.

The main features of RERA include:

All the industry players were required to get registered under the Regulatory Authority within 3 months from the implementation of RERA. They include the ongoing projects too. Ramesh Nair, CEO and Country Head, JLL India had said that “According to the RERA Act passed by Parliament last year, which was supposed to be implemented in its entirety in all states, every ongoing and under-construction project is supposed to come under the regulator’s ambit.”

Once a project is completed, the developer or the stand-alone property owners are required to obtain a completion certificate for the same. Such completion certificate is issued by the authority once they are satisfied after the inspection of the constructed building or project that they are completed in line with the approved building plan and mandatory standards and that there is no contravention on the part of the developer or builder.

This completion certificate is a crucial piece of paper. As only after the issue of this certificate, allotments can be made to the buyers. And all basic amenities depend upon this certificate. These amenities include sewage, drainage system, electricity, and water connections.

The Backlash of Buyers in Uttar Pradesh

Uttar Pradesh RERA authority website was launched recently, and the definition provided on the website provides an escape route to many builder and developers.

By definition ‘ongoing project’ includes all those projects for which the authorities issue completion certificate. But there are a few exceptions which are not covered under this category of ongoing projects. These exceptions include:

As it acts as a loophole for the builders, there has been an exponential increase in the number of application submission for a completion certificate in the Noida and Greater Noida area. This means that a large number of real estate sector players will not be liable to be registered under RERA.

This leaves their customers and homeowners in jeopardy as they cannot reap the benefits of the RERA Act created primarily for their welfare. Many of the home buyers and flat owner associations have come together and complained about the same and have urged the local BJP MLA Pankaj Singh to look into the matter and proposed a review of the law in UP.

Noida Extension Flat Owners Welfare Association President Abhishek Kumar said that “He (Pankaj Singh) has assured us that a discussion with chief minister Yogi Adityanath has been held and the matter will be taken up at cabinet level so that the clause is modified to support the buyer’s interest.”

Among the RERA provisions one of the provisions involve establishment of Real Estate Apellate Tribunal. The decisions of RERA can be appealed against in these tribunals if one is affected by RERA decision.

What is the Impact of RERA on NRIs...

How Does RERA Help Buyers?

Homebuyers were earlier subjected to harassment by builders and developers. Homebuyers use to c...