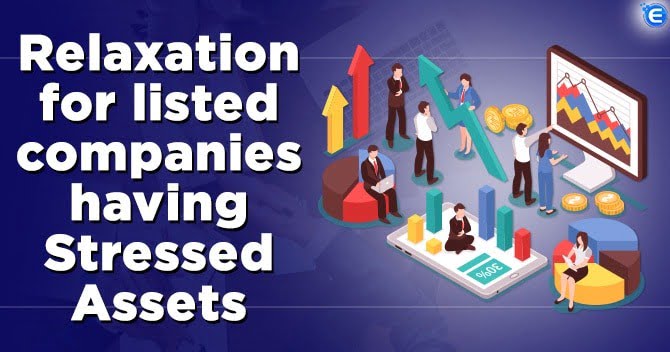 Which is a listed company?

A company whose share is traded on an official stock exchange is regarded as a listed company. It is required to adhere to the listing requirements of that exchange, which shall include how many shares are listed and a minimum earning level. Listed companies are owned by many shareholders. The shareholders are entitled to two forms of return by investing in a listed company. They are dividend and capital gains.

What is the purpose of this relaxation for listed companies?

According to SEBI, the framework will help stressed companies to raise capital through timely financial intervention, and it will also protect the interests of the shareholders. The regulator has earlier also taken the decision to relax many laws amidst the Covid-19 pandemic. These relaxations are essential considering the entire nation was under lockdown which restricted a lot of activities.

What are the relaxations stated by the SEBI?

The relaxation for listed companies from SEBI includes the following:

What is the eligibility to be considered as a stressed company?

A listed company meeting any two out of the following three conditions will be considered as stressed and hence shall be eligible under relaxation for listed companies:

What are some of the other conditions to be complied by the eligible listed companies to avail the relaxations?

Why is the relaxation for listed companies by SEBI essential?

Usually listed companies having stressed assets may have a progressive fall in their share price. Moreover, the disclosure that is made by the stressed companies such as their financial results and default in servicing debts also aggravates the fall. Such firms face difficulty in raising capital through traditional means. Therefore, the Securities and Exchange Board of India (SEBI[1]) eased the pricing methodology of preferential issues by such firm.

Considering the stressed status of the company, it may not be incorrect to suggest that aligning the pricing with that of the pricing requirement in case of the preferential issue to Qualified Institutional Buyers (QIBs), will increase the pool of investors effectively. Moreover, the exemption from the making of an open offer will lessen the additional burden on an incoming investor to comply with the strict requirements hence allowing more investors to put their money in such companies. To give effect to these regulations, SEBI ICDR (Issue of Capital and Disclosure Requirements) Regulations and SEBI takeover regulations have been amended. The relaxation for listed companies, introduced on 22nd June 2020, is expected to make fundraising through preferential allotments reasonably more straightforward for stressed companies.

Procedure for Shares issue through...

Where the Company having a paid-up share capital at any time, proposes to increase the subscrib...

The economic slowdown due to the Covid-19 pandemic has had a severe impact on a number of indus...