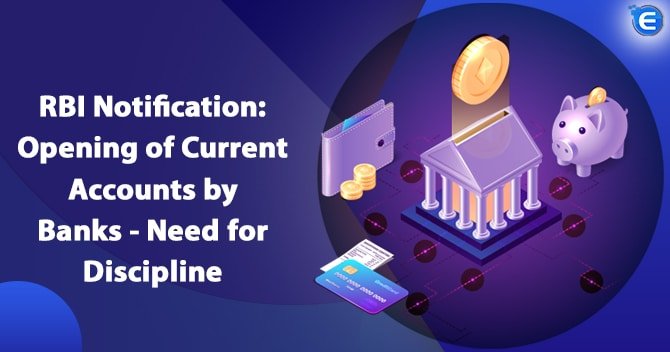 Stressing on the need for discipline, the Reserve Bank of India (RBI) disallowed banks from opening current accounts for customers who availed cash or overdraft facilities. The RBI notification consisted of the revised instructions on the opening of current accounts by banks.

Why was the RBI notification on the opening of current accounts by banks released?

The RBI had stated that the use of multiple operating accounts by borrowers, both current and cash /overdrafts, had been seen to be prone to vitiating credit discipline. It further said that the checks and balances put in place in the extant framework for opening current accounts had been found inadequate. Therefore the RBI decided to revise the guidelines that will help in bringing appropriate safeguards.

The main objective of this move by RBI is to ensure that the borrowers direct their payments to/ from a current account with the bank that has the largest exposure to the borrower rather than having more than one current accounts across banks.

Instructions on opening current accounts are as follows:

There is no restriction on the amount or the number of credits in the collection account, but debits in these accounts will be limited to the purpose of remitting the proceeds to the escrow accounts.

The banks must not route any withdrawal transaction from term loans taken by the borrower through current accounts, and funds from term loans should be remitted directly to the goods and services supplier.

Guidelines for conditions to avail CC or OD facility are as mentioned below:

All borrowers that have a working capital facility bifurcated into loan component and cash credit component must maintain balances at an individual bank in all cases, including consortium lending.

The RBI notification on the opening of current accounts by banks reiterates the need for taking steps that will strengthen the credit discipline. It can be understood by the words of the RBI governor, who stressed the need to safeguard the opening of accounts by borrowers availing credit facilities from multiple banks.

Read our article:RBI declares ‘floating rate loans to Medium Enterprises’ to be linked to External Benchmark

Co-lending model between banks and...

The Reserve Bank of India (RBI) brought out a notification on the co-lending model which has to...

RBI guidelines for Amalgamation of...

The Reserve Bank released a notification on May 24, 2021, stating that it would consider amalga...

RBI Notification: Steps to Ensure A...

In the latest RBI notification, RBI has mandated banks to fully automate NPA classification and...