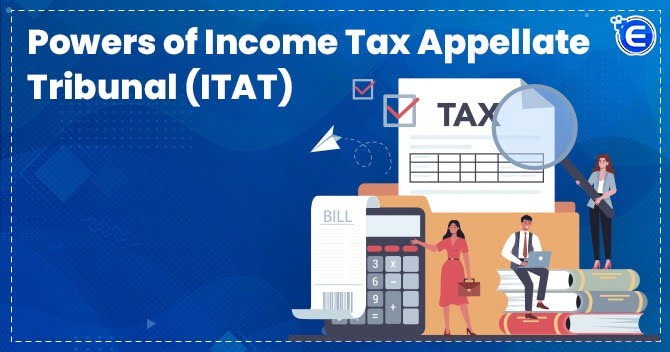 The Income Tax Appellate Tribunal (ITAT) deals with appeals against the orders passed by the income tax authorities. The idea behind forming an appellate tribunal was to lower the burden of cases on the Hon’ble High Courts across India. The Tribunal has been bestowed with wide powers and functions.The power is so diverse that it ranges from the power of remand to the power of rectification. We will discuss the powers of the income tax appellate tribunal in detail.

The Income Tax Appellate Tribunal was formed in the year 1941. It specifically deals with the matters and appeals pertaining to taxation. The Law Commission of India had recommended the formation of the Appellate Tribunal in different states across India.The tribunals sought to reduce the ever-increasing pressure on the high courts and ensure that speedy trials were carried out in matters related to taxation.

The Income Tax Appellate Tribunal was constituted as a second appellate forum with judicial and accountant members. It has been constituted by the central government but operates independently according to its process as provided under Section 255, with powers to regulate its own procedure. The Tribunal falls under the supervision of the ministry of law and justice and is a quasi-judicial body independent in its working and decision-making.

Under the Income Tax Tribunal Rules 1963[1], the ITAT has vivid powers and functions to deal with income tax-related cases. It also seeks to protect the aggrieved party against the arbitrary decisions of the Commissioner of the Income Tax. The Act, as well as the rules, lay down guidelines for various aspects ranging from the method for filing, the time limit, appeal disposal, procedure of conducting the appeal, and the powers of the Tribunal.

Let’s discuss the powers of the Income Tax Appellate Tribunal (ITAT) in detail.

The Tribunal under Income Tax Act- Section 254(2), can,in its entirety,recall its order if it believes that prejudice has been caused to the party due to the Tribunal’s mistake or error and where the error is manifest.

The Tribunal, in certain cases, can recall its order. The power to recall the order has been provided under Rule 24 of the Income Tax (Appellate Tribunal) Rules 1963. This power can be used only in case the assessee can show that it had a reasonable cause to be absent when the appeal was taken up and when it was decided ex-parte.

The Income Tax Appellate Tribunals have similar jurisdiction, authority and power for contempt of its orders just as the High Courts or some other Court in India. They exercise the powers under the Contempt of Courts Act 1971, which will have certain effects subject to modifications. The effect has been given below:

Tribunals have been constituted across India to ease the working of the higher courts. Different kinds of tribunals for different sectors play a pivotal role in society. Income Tax Appellate Tribunal (ITAT) have been formed with a similar objective. The Tribunal has been given broad powers to handle the matters pertaining to tax and evasion of tax. The orders passed by this sort of Tribunal are considered final. However, if the party is unsatisfied with the decision, a substantial question has to be determined. They can still appeal in the Apex court.

Read our Article: How to File an Income Tax Appeal with ITAT?

Introduction The tax regime of every country is an integral component of its economy since it i...

Deferred Tax Asset or Liability is an integral part of the financial statements. Adjustments ma...