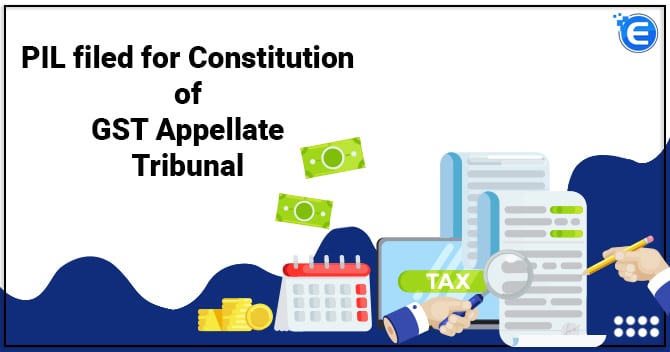 Recently a Public Interest Litigation (PIL) was filed in the Supreme Court of India, which sought for constitution of GST Appellate Tribunal. The petitioner stated that the Central Goods and Services Tax Act came into force 4 years ago in 2017, but the GST Appellate Tribunal mandated under Section 109 of the Act is yet to be established. Let’s discuss more on this development.

Firstly we need to understand what section 109 says about the constitution of an Appellate Tribunal.

This section contains the provision for constitution of Appellate Tribunal and benches thereof. It states that the Central Government would form a GST Appellate Tribunal with an aim to hear appeals against the orders gone by the Appellate authority or revisional authority.

PIL filed in the Supreme Court

The advocate in his plea also contended that aggrieved litigants are constrained to go to their High Courts under writ jurisdiction against orders passed by the Appellate or Revisional Authority in the absence of an appellate tribunal thus, it aggravates the case load of different high courts.

Facts presented by the petitioner

The petitioner mentioned the following facts:

The petitioner emphasised on the need for the speedy delivery of justice. He said that the objective for constituting tribunals is to ensure supplementation of the functions of the High Court and the other courts. Moreover, also to ensure that the consumer can get a speedy redressal of their grievances. This can’t be achieved if the tribunals don’t function effectively. Thus, the plea concluded the fact that there is a urgent need for quickening the process of constitution of GST Appellate Tribunal in the best interest of speedy justice.

Advocate Amit Sahni had earlier made a representation to the Finance Ministry and to the GST council and asked them to take appropriate steps to constitute a GST Appellate Tribunal mandated under Section 109 of the CGST Act 2017 which will help to avoid massive backlog of cases.

All you need to know about GST Regi...

GST is known as the Goods and Services Tax. It is an indirect tax that replaces many indirect t...

Form GST ITC-03 is a form which is submitted by registered taxpayers in special circumstances w...

Lok Sabha has finally passed the GST bill, and it is implemented from July 1, 2017. It has brou...