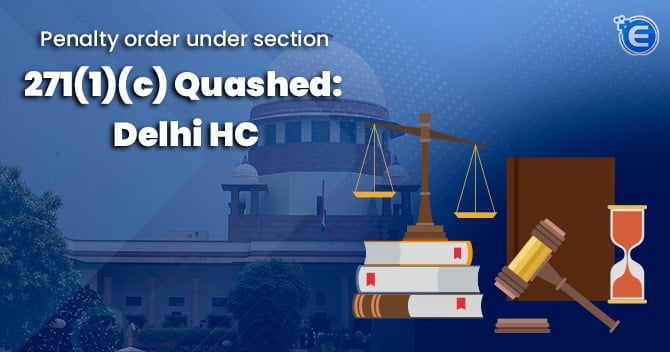 A recent order of the honourable Delhi High Court has ruled that a penalty order passed by the Income Tax Authority under the provisions of section 271(1)(c) of the Income Tax Act, 1961 is violative of the principles of natural justice since the authority failed to grant the assessee a fair before releasing the order of penalty.

Section 271(1)(c) provides talks about the penalty that may be imposed on failure to concealment of income etc. It states that if the Assessing Officer (AO) or the Commissioner (Appeals) or the Principal Commissioner in the course of any proceedings under the Income Tax Act, 1961[1] is satisfied that any person has furnished inaccurate particulars of income or concealed particulars of such income, then that officer of the Income Tax Department can direct that person to pay by way of penalty in addition to tax, if any, payable by him, a sum which shall not be less than the amount sought to be evaded by such person by reason of furnishing inaccurate particulars of his income or fringe benefits or by concealment of particulars of such income or fringe benefits. The penalty will not exceed the three times of the tax sought to be evaded by such person.

The Assessee Mayur Batra filed a writ petition before the Delhi High Court challenging the order of penalty imposed by the Income Tax Authority under section 271(1)(c) of the IT Act, 1961.

Submissions from the petitioner

The counsels of the assessee submitted before the honourable court that the Income Tax Authorities neither considered the replies filed by the assessee nor granted him a chance of personal hearing in response to the show cause notice issued by these authorities before passing an order of penalty under section 271(1)(c) of the IT Act, 1961.

Order of the Court

A divisional bench of the Honourable Delhi Court consisting of Justices Manmohan Singh and Dinesh Kumar Sharma found merit in the case of the petitioner and hence quashed the order of penalty under section 271(1)(c). The honourable Court then remanded the matter back to the Income Tax Authority for fresh adjudication of the matter.

Section 271(1)(c) of the IT Act, 1961 gives the power to the Income Tax authorities to impose a penalty on a person if it finds that such person has furnished inaccurate particulars of his income or concealed the particulars of such income.

The honourable Delhi High Court held that the income tax authority did not consider the replies filed by the assessee in response to the notice issued to him under the Act while passing the order of penalty under section 271(1)(c) of the Income Tax Act, 1961. The honourable court made a reference to a judgement passed by that court only in the case of Bharat Aluminium Company Ltd. v Union of India (2022)SCC OnLine Del 105 wherein it laid down that an assessee has a vested right of personal hearing and the income tax authorities need to extend the same if such request has been made by him.

The honourable Delhi High Court found that the order of penalty imposed on the assessee under section 271(1)(c) of the Income Tax Act, 1961 has violated the principles of natural justice since the petitioner was not given a fair opportunity of hearing. Therefore the Court remanded the matter back to the income tax authority for fresh adjudication of the matter and directed the tax authorities to grant a hearing to the assessees before issuing orders of penalty.

Such orders where the assessees have not been given a fair opportunity of hearing to respond to the show cause notices issued by the income tax authorities has been common lately. The modus operandi of the these assessment authorities is that they issue show cause notice and then without giving the assessee a fair opportunity of hearing release the order of penalty under section 271(1)(c)  of the Income Tax Act, 1961. The High Courts of various states have taken similar views with respect to such orders of penalty wherein they have held that principles of natural justice were not followed because right to fair hearing was not allowed by the department. Hence, they are quashing such orders and relegating the matter for fresh adjudication. A similar view was made by the Bombay High Court in a recent case of Pankaj s/o Roshan Dhawan v National e-Assessment Centre and Ors. where the court quashed the penalty order when the income tax authorities failed to follow principles of natural justice of fair opportunity of hearing to the assessee.

As part of the current digitisation program, income tax returns can be e-verified online withou...

Income tax Return is a form through which an individual informs the Government about his Annual...