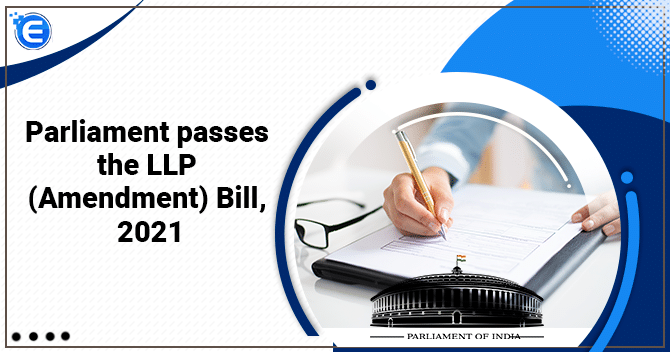 The Lok Sabha recently passed the Limited Liability Partnership (Amendment) Bill, 2021, with a view to encourage the start-up ecosystem and facilitate greater ease of doing business. This is the Ist time that amendments have been proposed in the Limited Liability Partnership Act 2008 since its enactment. A total of 30 amendments have been made to the LLP Act 2008 by the introduction of the LLP (Amendment) Bill, 2021.

Meaning of Limited Liability Partnership or an LLP

An LLP is a corporate business structure that extends the benefits of limited liability of a company and provides the flexibility of a partnership. An LLP is a separate legal entity that is liable entirely of its assets, but the liability of partners is limited to contribution in such LLP.

It may continue its existence regardless of changes in partners and can enter into contracts and also hold property in its name.

What is the main objective of the amendments introduced vide LLP (Amendment) Bill, 2021?

The main objective behind the amendments is as follows:

In this segment, we shall discuss some of the key amendments.

In case of non-compoundable offences, which are serious violations having an element of fraud, intent to deceive and caused injury to public interest or non-compliance of order of statutory authorities, status quo will be maintained.

The bill also introduces new concept called the small LLP, just like the concept of small company under the Companies Act 2013. Currently, there are relaxations for thresholds up to a turnover size and partner’s contribution of 40 lakh rupees and 25 lakh rupees, respectively.

Further, these small LLPs would be subject to reduced fee, less compliance and small penalties in case of a default.

The bill states that the regional directors authorised by the Central Government can compound any offence under this Act that is punishable with fine only by collecting it from the person suspected of having committed an offence.

It is worth mentioning here that the decisions of the special courts may be appealed in high courts.

It has been proposed to permit LLPs to raise capital through the issue of fully secured NCDs from investors regulated by SEBI/RBI. It will assist in the deepening the debt market and enhance the capitalization of LLPs.

As per the LLP Act 2008, appeals against the NCLT orders lie with the National Company Law Appellate Tribunal.  The amendments provide that the appeals can’t be made against the orders passed with the consent of the parties, and appeals should be filed within 60 days period of the order.

Further, it has been proposed to amend Section 69 to reduce the additional fee of 100 rupees per day applicable presently for delayed filing of forms, documents. A reduced additional fee will incentivize smooth records filing and returns of LLPs and will eventually result in an updated registry for proper regulation.

The bill has also proposed to increase the maximum term of imprisonment from 2 years to 5 years in case of any fraudulent activity, and a fine can also be levied between 50000 to 5 lakh rupees.

The accounting and auditing standards for LLPs have been introduced by adding section 34A in the bill. It is done to bring standardization in the procedure.

LLPs are the most flexible form of business structure, and with the latest amendment, a lot of small and large enterprises are covered. The LLP (Amendment) Bill, 2021, seeks to improve the ease of doing business and encourage start-ups to go ahead with the LLP business structure.

Read our article:MCA Initiates Process of Decriminalisation of Compoundable Offences under LLP Act

Based on the recommendations from the Company Law Committee, the Ministry of Corporate Affairs...

Due to increase in investment opportunities in India and been a developing country, people from...