LLP: Firms can no Longer get away with Lapses 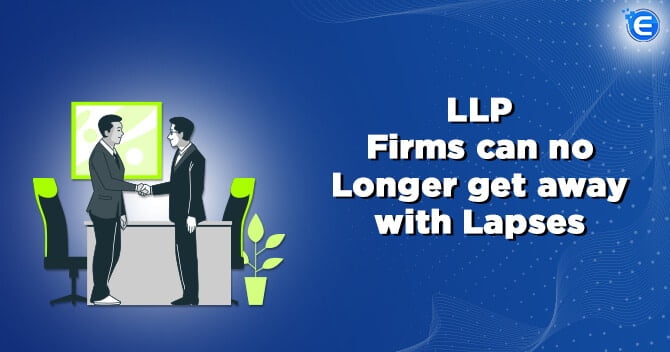 Usually, whenever any application or document is required to be filed with the Central Government or with the Registrar of Companies (ROC) and the same is not submitted within the prescribed time limit provided under the provisions of the Companies Act, 2013 then, in that case, there is need to follow a separate procedure for the Condonation of delay. Further, as per the recent amendment made by the Ministry of Corporate Affairs (MCA) in section 460 of the Companies Act, 2013, LLP Firms can no longer get away with lapses in the filing of information with the ROC (Registrar of Companies). Hence, this means that the provisions of Condonation of Delay by Central Government in certain cases provided under section 460 of the Companies Act, 2013, shall now onwards also apply to a limited liability partnership (LLP), starting from the date of publication of this notification in the Official Gazette. In fact, the regulatory norms which are applicable to the Limited Liability Partnership firms are now made much stricter in nature by the Ministry of Corporate Affairs.

In India, there had been a little over 1.55 lakhs active LLPs. Moreover, the major parts of these are engaged in the business services, such as trading, manufacturing and real estate and renting. LLP is the short form for the Limited Liability Partnership firms. It is governed and administered by the LLP Act, 2008 and combines the advantages of both a partnership firm and private limited company. The concept of a limited liability partnership was introduced to provide a business structure that is easy to maintain and also help owners by offering them the benefit of limited liability. Due to this reason, the concept of LLP has become a preferable business model in India.

As we all know that for each form or application, there is a time limit fixed by the provisions mentioned in the law within which the same is required to be made or filed. If in case the same is not done within the said time limit, then there is a need to pay an additional fee prescribed under Section 403 of the Companies Act, 2013 read with the Companies (Registration, office and fees) Rules, 2014.

According to Mr Gaurav Mohan, Chief Executive Officer (CEO), AMRG and Associates, the step ‘LLP Firm can no longer get away with lapses’ can be seen as the beginning of the imposition of the provisions of the Companies Act, 2013 to Limited Liability Partnerships.

Further, according to him till now LLPs were following easier compliance norms due to which there was a limitation in the powers provided to the ROC (Registrar of Companies) regarding the inspection of the affairs of such entities. Furthermore, by imposing more and more provisions of the Companies Act, 2013 over LLPs would bring the concept of LLPs inspection and inquiry in the ambit of the powers given to the RoC, because till now the ROCs power concerning inspection and inquiry was limited to the companies alone. Lastly, Imposition of more compliance norms will act as a pioneering move in unmasking doubtful organizations which have taken the route of LLP in order to stay at bay from the compliance requirements of the Companies Act 2013.

According to Mr Vishwas Panjiar, a partner at Nangia Andersen, MCA has observed that there has been a large percentage of companies and LLP’s which have not submitted the statutory documents. So, the amendment in the Companies Act, 2013 has been made for making them liable for the penalties and prosecution because of such non-compliance.

Need for amending Section 460 of the Companies Act, 2013 by the Ministry of Corporate Affairs

On this Mr Panjiar said that the MCA (Ministry of Corporate) has been regularly taking steps for regularizing the non-compliant entities and has even introduced the Company Law Settlement Scheme, 2014 and the Condonation of Delay Scheme, 2018, wherein the companies were given a chance to condone the delay caused by filling documents and granting them immunity from the prosecution and reduced additional fee.

Recently, the MCA has decided to amend Section 460 of the Companies Act, 2013 to make it applicable for the LLPs. As, many instances have been reported to the ministry wherein the LLP’s have not been able to file their annual documents with the ROC due to different reasons, such as the disqualification of designated partners or directors, requirement of the affixation of the digital signature certificate (DSC) of two designated partners (DP) on the annual forms and de-activation of the DIN of such disqualified DPs,

Mr Vishwas Panjiar, further stated that unfortunately, the LLP Act, 2008 does not provide any cure for such a situation unlike the Companies Act, 2013. So, this amendment has now enabled the government to come up with some schemes and measures to provide an opportunity to the defaulting LLPs (Limited Liability Partnership) to make their default into good by filling the belated documents without any prosecution and penalty,

Notwithstanding anything contained in this Act,—

Amendment in the provisions of Section 460 of the Companies Act, 2013

The Ministry of Corporate Affairs (MCA) vide its notification issued on 30 January 2020, in the exercise of powers conferred by sub-section (1) of section 67 of the Limited liability Partnership (LLP) Act, 2008, confirmed that the Central Government has directed that the provisions of section 460 of the Companies Act, 2013 shall from now onwards be applicable on a limited liability partnership (LLP) also. Further, the said amendment came into effect from the date of publication of the concerned notification in the Official Gazette. The said amendment shall come into force from the date of Official Gazette, i.e. 30 January 2020.

Further, the Para 22.3 of the Company Law Committee report provides that the Committee also felt that there is a need to make clarification that, irrespective of the delay caused, obtaining Condonation of delay is not a pre-requisite for filing a document. As, there is a separate process prescribed under section 460 of the Companies Act, 2013 in respect of all the belated filings.

In reference to Section 430 of the Companies Act, 2013, it has been noted that immunity provided to the companies to file within an additional 270 days has been now done away with. Hence, any filing beyond the timeline specified in respective of the section will attract additional fees along with Condonation of delay. Moreover, the default on two or more occasions in the filing, submitting, registering or recording of the concerned document, fact or information will invite higher penalty. Lastly, the penalty imposed will be twice of the additional fee prescribed in the Act.

Procedure for the Condonation of Delay

What if the Application for the Condonation of Delay is not made?

Where the delay is not condoned or the application for the same is not made, then the same will be specified in the secretarial audit report prepared in the Form MR-3 along with the Certificate in relation to the annual return given in the Form MGT-8.

The LLP Act, 2008 lacks in providing a measure for the LLPs regarding the delay caused, and moreover, there was a limitation in the powers offered to the ROC (Registrar of Companies) regarding the inspection of the affairs of such entities. So, by the amendment made in section 460 of the Companies Act, 2013, the government is now enabled to come up with some new schemes and measures to provide an opportunity to the defaulting LLPs (Limited Liability Partnership) to make their default into good by filling the belated documents without any prosecution and penalty.

Hence, it is rightly said that from now onwards LLP Firms can no longer get away with lapses.

How to Start Small Business in Cana...

Canada is ranked 2 by World Bank, in terms of ease of starting a business. One can register the...

Today, with the rise of e-commerce, we see a number of things requiring transport from one plac...