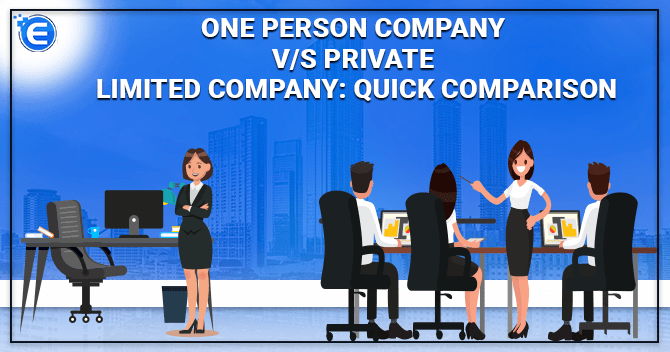 The origin of One Person Company was made by GREAT BRITIAN through its judgment given in Saloman & Saloman Co Ltd in the year 1925.

One Person Company is introduced in India in 2013 via Amendment in the Company Law. It came in force on 20th September, 2013.

The concept came much earlier in the other countries like, China (2005), Singapore, France, and USA.  The requirements for its formation may differ from country to country.

JJ Irani Committee in 2005 recommended the concept of One Person Company (OPC). The committee agenda was to create ease of doing business in India and to reduce the burden of compliance requirements on an individual. Prior to this, in India the structure of sole proprietorship was allowed.

Mostly small companies are managed by one person only, as per the requirement it has to bring another person to continue as private company. The burden is increased like, compliance requirements of conducting shareholder meetings where the presence of both the shareholders are required. The aim was to promote the small businesses and companies to grow and where small entrepreneurs are not panicked by the procedural requirements.

The feature of this form of company is only one director/one shareholder. This first member/ shareholder/ director acts as the first director of the company. He has complete control over the company. The maximum number of Directors can be appointed are 15.

The minimum paid up capital for this form of entity is Rs. 1 lakh.

Nominee Director is appointed to continue the functions of the company after the death of the sole member who has the control of the firm. The nominee shall be natural person who should be Indian Resident and Citizen. The consent can be obtained in writing from the person who will be nominee. The consent shall be given voluntarily. The name of the nominee shall be stated in the memorandum of association.

OPC is defined in Sec 2(62) of Companies Act. There is no compliance burden on the company

OPC can be formed in two categories:

Section 92 specifies that there must be signatures of Company Secretary on the Annual Return of the Company or in case of no CS, signatures of the director.

Section 122 states that section 98, section 100 to section 111 is not required for a One Person Company. No necessity to conduct the Annual General Meeting and the Extraordinary General Meeting (EGM). As per Section 114, if any special business transaction occurs through special or general resolution, the resolution has to be mentioned in the minute’s book which is to be maintained as per Section 118, which is signed and dated.

3. Directors And Board Meetings

As per Section 149, 152, 173 of the act, an OPC can have 15 maximum directors which can be increased after passing special resolution.

The OPC has to file a copy of ROC duly signed and adopted by its members and all other documents with the financial statements within 180 days of the closure of financial year.

The main feature of the Private Limited Company Registration is that it is a distinct entity. It can own property in its own name.

The minimum members required are 2 and maximum can be 200.

Also, there is requirement of Minimum Two Directors.

The liability of the members/subscribers/shareholders of the company is limited. This means the member is liable to the extent of the unpaid share (value of the share they take over). The company in case of debts can sell its personal assets in order to pay its debts.

Rs 1 lakh is the minimum amount of share capital for a private limited company.

D. No Transferability Of Shares

The Private Limited Company restricts the transfer of shares to the public.

E. No Investment By The Public

What Are Legal Compliances Of The Private Limited Company

How Does the Profit Sharing Work Am...

There is no concept of profit sharing in a Pvt Ltd company, you cannot share profit in a profit...

Every Private Limited Company needs to do a few things after incorporation. Opening a bank acco...

How to validate the Company Registr...

The articles talks about the Company Registration Number, its difference with CIN and the proce...