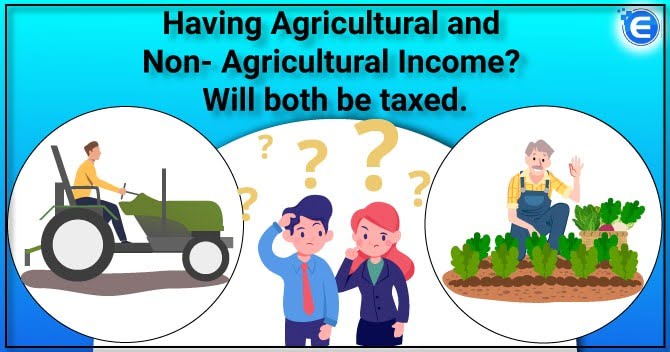 Under the Income Tax Act, 1961 the agricultural income is defined as:

The following are some examples of agricultural income:

The following are some example of the non agricultural income

This method is applicable in the following conditions

In simpler terms, the non-agricultural income must be more than the highest amount not chargeable to tax. (As per the Tax Slab)

The following step is to be followed for the calculation of the agricultural Income:

These businesses include rubber, coffee and tea and further regulated by these percentages:

The agricultural operations which are conducted out on any land, either rural or urban, the income which is obtained from the sale of the agricultural generate must be treated as agricultural revenue with the exempt from tax.

The exception to the calculation of Agricultural Income

In any case, where the criterion related to the agricultural land is not met under the section of Income tax, the individual required to carry out a separate tax evaluation. Also, if the total income is below Rs. 5000, then the ITR has to be filled.

Scope and Implications of Section 2...

Every payment covered under the TDS provisions should be made after a deduction of tax. Every p...

In the article, we will discuss chargeability of tax on a salaried person by the Indian Governm...

Some Common Penalties under Income-...

An assessee who commits an offence under Income Tax Act 1961 shall be subject to penalty. The p...