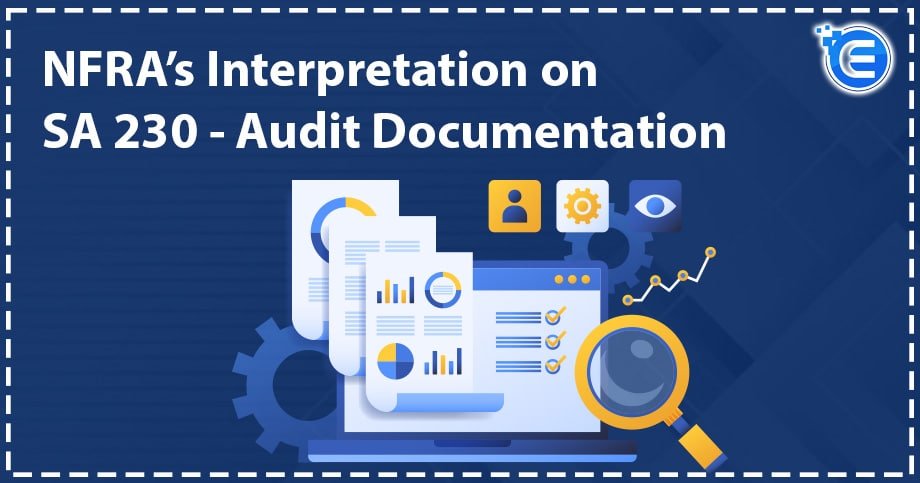 Standard of auditing 230 refers to the auditor’s purpose in constructing documentation of audit, which gives an adequate and relevant record of the basis for the audit documentation, and the audit report is a piece of evidence that the audit was planned and done in line with SAs and applicable legal and regulatory requirements.

This article discusses the interpretation of SA 230 in detail in accordance with the audit quality review performed by NFRA.

What is Audit Documentation?

Audit documentation refers to relevant evidence of the record of the audit process and a summary of the audit that the auditor performs.

It provides evidence of whether the auditor’s purpose was achieved or not and audit was planned and done as per the standard on auditing.

The importance of audit documentation and compliance with SA 230 as per the national financial reporting Authority (NFRA) are given below:-

The duty of “due diligence” owed

The following things about the users of financial information:  The present and potential investor, customers, employees, lenders, suppliers, creditors, government and their agencies and the public is included as the users of financial statements, but it excluded the management of the entity from the user definition, said by the ICAI Framework for the preparation and presentation of financial Statement in accordance with Indian Accounting Standards.

A financial statement’s objective is to give information about the financial performance, position, and cash flows of a business that will be helpful to the users in economic decision-making. To fulfil the users’ information needs, “due diligence” is required. Apparently, the management is not owed the responsibility of due diligence.

Ensure Compliance with “due diligence”

To comply with “due diligence,” one must meet the requirements portion of the SAs. The duty of “due diligence” no longer remains a blurry, unformed responsibility but a distinctly defined duty. Additionally, it is not a situation where the regulator’s judgement or opinion is an alternative to the auditor’s. Delivering the due diligence and successfully claiming it, the auditor must stick to a clear set of the positive obligation imposed by the SAs. Legal authorities that discuss the conception of due diligence broadly have to depend on the common principle.

The duty to be discharged

The auditor must show the skill, competence, and application level commonly expected of such a professional. This is the exclusive minimum. Acknowledge the fact, the users’ interest is different from the management’s interest; SAs also need to keep independence from the management of the auditee entity. Excluding SAs, several limitations and provisions to ensure independence formed into the companies act as such, that require to be followed with. Along with this, the auditor requires to maintain an attitude of professional suspicion, which is defined as “an attitude that involves a doubtful mind, being attentive towards the conditions which may stipulate possible misstatement because of error or fraud, and a difficult evaluation of audit evidence” of SA 200). It also comprises “questioning opposing audit evidence and the accuracy of documents and reply to inquiries and other details obtained from management and those charged with governance “of SA 200).

Interpretation of Fundamental Requirements of SA 230, SQC 1 and SA 220

SA 220 – Quality Control for an Audit of Financial Statements

Let the Audit File Speak For Itself

According to SA 230, the Audit File should be capable of speaking for itself without requiring other aids for interpretation. The audit documentation should support anything that has been claimed to have been done through audit procedure or gathered as audit evidence. No claim that is not so supported can be taken into consideration. Given this position, there is virtually no scope for oral submissions or discussions in the SAs. To be included in the record and remove the possibility of disputes, oral representation is also reduced to writing. Only such records, backed by pre-existing evidence from the Audit File, can be accepted for the Audit Quality Review (AQR) by NFRA. Unverified claims and oral representations are not considered.

Record on the Basis of Professional Judgements

Preparer and Reviewer of Audit Work paper & their Signoffs

SA 230 says, “In the documentation of audit procedures performed, the auditor shall record the following things:

(a) The identifying features of the particular items or matters tested.

(b) A person who performed the audit work, and the date of such work will be completed.

(c) An individual who reviewed the audit work performed, and what was the date and extent of such review?

Signing off of the document is not just a mechanical exercise. As such, if a Work paper does not mention the name of the person who reviewed it along with the date, it decisively proves that the same Work paper is not reviewed. The Audit Firm’s assertion that “Non-signing of Environmental professional on Work paper does not conclude that of Environmental professional has not reviewed the determination of materiality” is not tenable.

Professional standards are applied in EQCR’s work. Judgement, and it is unlikely that EQCR also applies in every condition the ET’s professional judgement is reached. The requirements for documentation of professional judgements in work involving the SAs require that the judgement be made independently of the ETS. In this context, as explained in this AQRR by NFRA, the audit documentation requirements of SA 230 become essential for the EQCR. Therefore, it is evident that the documentation by an EQCR also includes relevant information to allow an experienced auditor, having no past connections with the engagement, to get to know the process performed by the EQCR. This does not state that the EQCR will rebuild all the documentation prepared by the ET, but will document how he used in his assessment the data and the factors examined by the ET to agree or disagree with the conclusions reached by the Audit Firm.

The EQCR team must record the rationale and supporting evidence for its conclusion, such as the review process used, the professional judgement made, the areas in which the EQCR challenged the audit team, the critical issue the EQCR talk with the audit team, the areas of disputes, the resolutions reached, and the additional evidence/documents/explanations considered. Simply providing “Yes or “No” responses in the checklist and signing the WPs of ET does not give any such evidence.

Takeaways for auditors from the above interpretations of SAs and the CA act by NFRA is to do whatever is required but under the rules and regulations, standards on auditing(SAs) and in accordance with the legal provision of the companies act,2013, including CARO 220. Let your audit documentation and file speak for themselves and be your lawyer for free. Include everything in your audit reports or file regarding industry realities. After auditors have any queries after sending the audit file, they can email them with evidence they missed out. The audit documentation of everything the auditor noted is always accurate, relevant and valid as per the Indian auditing standards and Indian laws.

Muskan has completed a Bachelor of Commerce and MBA with a specialisation in Finance and Marketing. She is very dedicated, focused and attentive towards her work. She has a decent knowledge of Finance and Accounts with a prior experience in the finance domain. She secures experience in research work which enhances her knowledge and skills.

Why Accurate Financial Statements A...

How important are accurate financial statements for companies? The value for people who own and...

If you are a taxpayer or an investor, then there are various deadlines that you cannot afford t...

On the 26th day of December of 2018, the government has made some Amendments to the existing FD...