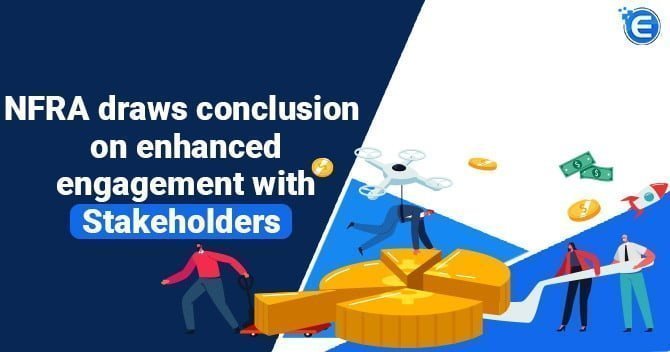 The National Financial Reporting Authority (NFRA), the audit authority, has issued conclusions based on comments received on the consultation paper on increased stakeholders engagement.

The National Financial Reporting Authority (NFRA) is an agency established under Section 132 of the Companies Act of 2013. This authority’s constitution went into force on October 1, 2018. In this respect, it seems that the Central Government’s objective is to:-

The mandate of the NFRA encompasses all aspects of financial reporting by PIEs (Public Interest Entities), from standard-setting to reviewing and assuring a successful compliance with those Standards by stakeholders.

According to the NFRA Charter, the organization should be renowned for:-

Furthermore, the National Financial Reporting Authority (NFRA) has reached conclusions based on comments received on the consultation paper on increased stakeholders engagement.

This begins after NFRA requested its Technical Advisory Committee (TAC) to investigate the concerns and make recommendations.

According to a Ministry of Corporate Affairs release, the TAC filed its analysis report at the end of March 2021. NFRA reviewed the TAC’s reports and suggestions, and in June 2021 issued a consultation document requesting public feedback/suggestions on the suggested measures NFRA intended to take in this respect.

The deadline for submitting comments was July 30, 2021.

Stakeholders engagement and Input is sought on the following recommendations:-

The Ministry stated, “NFRA has recognized interaction with numerous types of stakeholders as key in its approach to execute on its public interest mandate.”

According to the Ministry, NFRA has analyzed all public comments and reached decisions on how to proceed with the concerns raised in the consultation paper. The results of the NFRA, as well as the comments received, have been posted on its official website.

“NFRA appreciates all of its key stakeholders’ important suggestions/opinions,” it stated.

The Central Government created the audit watchdog in October 2018 with the primary goal of bringing about systemic reform in the Indian Financial Reporting System for Public Interest Entities (PIEs).

Overall, Stakeholders have endorsed NFRA’s recommendations to increase stakeholders engagement more proactively. NFRA has reviewed all of the public comments and reached decisions on how to proceed with the concerns raised in the Consultation Paper. The findings of the NFRA, as well as the comments received, are available on their website given:-

KPIs for Finance and Accounting Dep...

Each department in each company uses something called key performance indicators (KPIs) in orde...

Under the Indian Transfer Pricing Regulations, outstanding receivable has been one of the major...

After analysing the causes of failure of start-ups across the world, the major cause of their f...