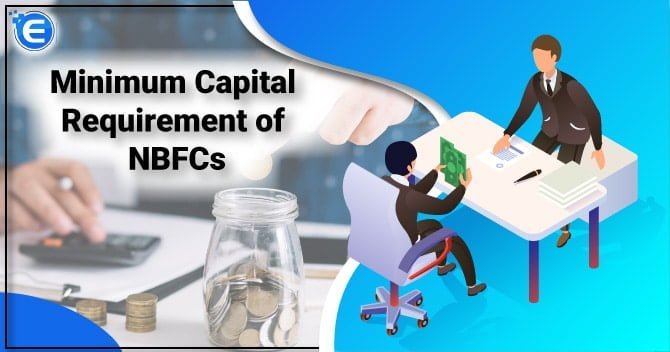 The NBFCs (Non-Banking Financial Companies) have come a long way in terms of their operation, size, technology and financial products. The first and foremost requirement for any NBFC to begin operation is obtaining NBFC License from RBI to carry out operations as per Section 45-IA of the RBI Act, 1934. The section also prescribes the minimum Net Owned Funds (NOF) requirement.

Before we move towards the requirement, let’s take a look at the meaning of Net Owned Funds in terms of NBFCs.

The resultant amount is further reduced by following items:

The minimum capital requirement for the NBFCs incorporated before April 21, 1999, as 25 lakhs. After April 1999, the prescribed limit has been increased to 200 lakhs. However, the prescribed capital shall be attained as per the following timeline:

The companies striving to achieve the above capital requirements should submit a statutory auditor’s certificate certifying compliance to the revised levels at the end of each of the two financial years as given above. Any NBFC failing to achieve the above limits within the postulated time will not be eligible to hold the CoR as NBFCs and the RBI will initiate the process for cancellation of CoR against such NBFCs.

Acceptance of Deposits by NBFCs

An unrated Asset Finance Company (AFC) complying with all the prudential norms and maintaining capital adequacy ratio of at least 15% and having NOF of 25 Lakhs is allowed to accept or renew public deposits not exceeding one and half times of its NOF or up INR 10 crores, whichever is lower.

On the other hand, a rated NBFC complying with all the prudential requirements are allowed to accept deposits up to 4 times of their NOF.

Read Also: What are the Regulatory Requirements of Non-Banking Financial Company in India?.

In the case of non-deposit taking NBFCs having an asset size between 50 crores and 100 crores, the quarterly return shall be submitted with RBI which shall contain the basic information; such as, the name of the NBFC, the address of the NBFC, profit/loss during the last three years, and the details about the Net Owned Funds (NOF).

Every entity seeking registration as an NBFC-Factor should have and maintain a minimum NOF of INR 5 crores. Existing NBFC-Factor having an NOF of less than 5 crores should seek for a necessary time period from the RBI to increase its minimum NOF.

Every entity desiring registration as NBFC-MFIs will need a minimum NOF of INR 5 crores; however, those NBFC-MFIs, which are located in the North-Eastern Region of the country shall require NOF of INR 2 crores.

In a case of opening a Branch/Subsidiary/Joint Venture/Representative Office/or Undertaking Investment Abroad by NBFC, the following general conditions related to the NOF must be satisfied:

Will Fixed Deposit form part of the Net Owned Funds?

Investments in fixed deposits, as well as receipt of interest income on fixed deposits with banks, shall not be treated as a part of Net Owned Funds (NOF) as these are not covered under the activities mentioned in the definition of “Financial Institution” in section 45I(c) of the RBI Act. However, bank deposits consist of near money and can be used only for short-term parking of idle fund still initiation of NBFI business.

Calculation of NOF while making Investment through Alternative Investment Funds

Any investment made by a concerned NBFC in entities of the same group of companies shall be treated similarly, whether the investment is made directly or through an Alternative Investment Fund (AIF) / Venture Capital Fund (VCF) while calculating the NOF amount.

RBI is very particular about the maintenance of the required Net Owned Funds (NOF) by all NBFCs. Any non-compliance in this field by NBFCs will attract strict action on the part of RBI and will eventually lead to revocation of the COR.

Do you wish to apply for NBFC Registration with rbi? Or are you looking for an NBFC Takeover advisory? Would you like to know about NBFC / Fintech consulting or know more about peer to peer lending? Please feel free to contact Enterslice, India’s leading online legal and tax advisory firm.

If we reside in urban areas there a good chances that we come around various loan options such...