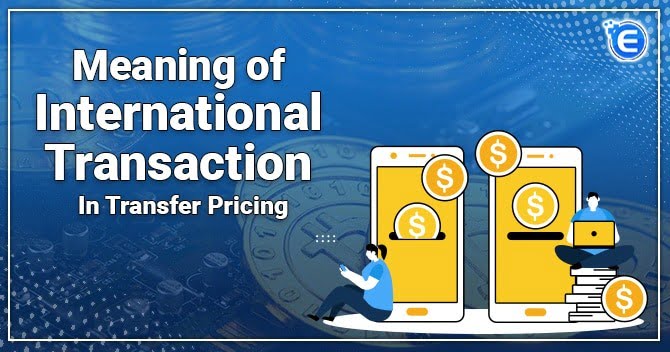 Transfer pricing pertains to the pricing policy used when goods or services are transferred between affiliated businesses. The goal of transfer pricing law is to make sure that transactions between associated enterprises do not occur at an unreasonably favourable and controlled price.

The primary goal of transfer pricing legislation in international transactions is to help make sure that transactions between related enterprises are carried out at the same price as if they were carried out between unrelated parties.

It is critical to first comprehend how the term “transaction” is defined in the Income Tax Act of 1961. The transaction is defined in Section 92F(v) of the Act as follows:

According to the preceding definition given under law, a transaction includes any agreement, understanding, or activity, whether formal or informal, oral or written, and whether it is entered into with the aim of being legally enforceable or not. This term, as an inclusive definition, is much broader in scope and encompasses all types of agreements under its purview.

What is an International Transaction in Transfer Pricing?

Section 92B of the Income Tax Act has defined the meaning of an international transaction. In the context of transfer pricing law, an “international transaction” is defined as a transaction between two or more associated enterprises, one or both of which are non-residents, in which tangible or intangible property is purchased, sold, or leased, services are provided, or money is lent or borrowed.

The transaction of provision of services between two or more related firms is included in the definition of International Transaction as indicated in Section 92B. Explanation to Section 92B has particularly expanded the scope by incorporating the provision of market analysis, marketing strategy, marketing management, administration, technical services, repairs, designing, consulting, agency, scientific research, legal or accounting service within the purview of ‘provision of services’ with retrospective effect from April 1, 2002.

It is typical for enterprises in a group to engage in financial transactions such as lending or borrowing money, offering guarantees, and so on. Because such transactions have an impact on the enterprise’s revenues and losses, they are classified as international transactions. Explanation to Section 92B significantly broadened the definition of the international transaction to expressly embrace a variety of capital financing activities, such as guarantee, acquisition, or sale of marketable securities, or any sort of advance, payment, or deferred payment or receivable, and any other debt.

In a group organization, there are normally a few entities that provide support services to all of the group’s entities, and the costs paid by these entities are reimbursed by the other group companies who receive such services. A mutual agreement or layout between two or more related enterprises for the distribution or apportionment of, or any contribution to, any cost or expenditure incurred or to be incurred in relation with a benefit, service, or facility provided or to be provided to any 1 or more of these enterprises is included in the expanded definition of international transaction.

The business restructuring may entail the cross-border transfers of valuable intangible assets or a significant renegotiation of current agreements. Restructuring can take the shape of organizational change (a change in the ownership structure or administration of group companies) or operational change (which is a change in the functional or risk profile of the group companies).

It is important to remember that any transaction that meets the above two characteristics is considered an international transaction, regardless of whether the other party is a non-resident or not.

Section 92 of the Income Tax Act of 1961, which deals with the calculation of income resulting from overseas transactions, states that any income coming from an international transaction must be computed using the arm’s length price. It may be noted that an ‘arm’s length price’ is one that is applied or planned to be applied in an uncontrolled transaction between persons or entities other than related enterprises.

The most relevant technique among the following shall be used to compute the arm’s length price, depending on the nature of the transaction:

Keeping of information and books of accounts

Every participant who has entered into an international transaction must keep and maintain specific information and papers in that regard. Such information and papers are required by Rule 10 D of the Income-tax Rules of 1962. It should be noted that failure to keep and maintain such documentation would result in a fine of 2% of the value of any such foreign or international transaction.

Further, if a person or entity enters into an international transaction and the Assessing Officer (i.e., AO) deems it necessary, he may refer the calculation of the arm’s length price in connection to the said international transaction to the Transfer Pricing Officer with the explicit permission of the Principal Commissioner or Commissioner. As a result, if necessary, the officer in charge will make an adjustment.

Associated firms that engage in international transactions must ensure that the transactions are conducted at arm’s length price as if they were taking place between unrelated & independent parties in an uncontrolled manner. If such an arm’s length pricing is not secured and appropriate documentation is not kept, in that case, modifications and fines may have to be enforced.

A Guide to Transfer Pricing Regulat...

As multinational corporations become more involved in economic operations in the country, new a...