What is Form 3CEB- Accountants Certificate? 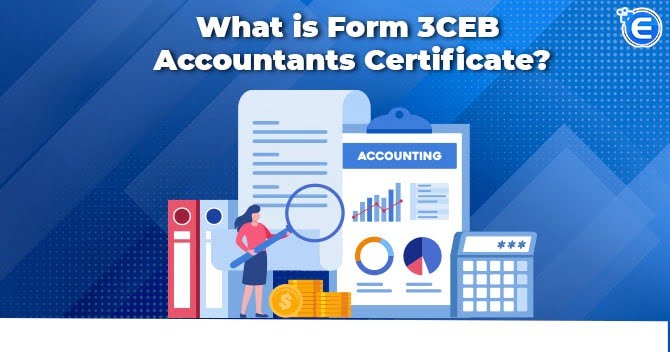 Preconditions of Form 3CEB in India

International transaction refers to a transaction which is made between two or more associated enterprises where either or both of whom are non-residents in the nature of purchase, sale/lease of the tangible/intangible property or provision of services, or lending/borrowing money or any other transaction that has a bearing on profits, income, loss or assets of such enterprises and includes a mutual agreement or arrangement among two or more associated enterprises for allocating or for the apportionment of or any contribution to any cost/expense incurred or to be incurred in connection with a benefit, service, facility provided or facility to be provided to any or more of such enterprises.

According to the provisions of the Act, if a transaction falls within the ambit of the specified domestic transaction, then the compliance requirements of transfer pricing documentation, accountants’ report etc., shall be applicable to it in the same way as it is applicable to international transactions.

Who is required to file Form 3CEB?

The answer to the above question is that if a company engages in either international transactions or specified domestic transactions with an associate enterprise, then such company should file the Form 3CEB in accordance with the transfer pricing regulations in India.

Further, these provisions applies to every person, which also includes foreign entities hence these provisions shall equally apply to foreign companies having international transactions with any associate enterprise.

The following are the reporting requirements that needs to be met:

Non-compliance with the requirements under Form 3CEB

On non-compliance with the requirements, penalty can be imposed. The penalty provisions have been described below:

Further, in case the assessing officer or the commissioner during the course of any proceedings under the Act knows that the accountant or a merchant banker or a registered valuer has provided incorrect information in any report or certificate furnished under the provisions of this Act or the rules made thereunder then the assessing officer or the commissioner shall direct the accountant or such merchant banker or registered valuer to pay a penalty of a sum of 10000 rupees for each such report or certificate as the case may be.

What are the taxpayer’s responsibilities in this regard?

A taxpayer shall fulfil the following responsibilities:

This form needs to be furnished under section 92E of the income tax act relating to international transaction(s) and specified domestic transaction(s).Taxpayers should ensure strict compliance with the requirements under Form 3CEB else, it may invoke penalty provisions as specified above.

An introduction to the 5 Transfer P...

Multinational enterprises and tax authorities can apply a variety of methodologies to dete...

The multinational corporations engage in multiple transactions among its entities in multiple j...