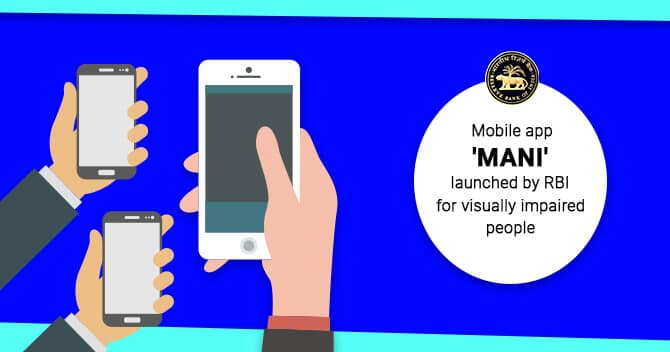 To make currency notes more accessible for 80 lakh blind or visually impaired people in the country, RBI took the help of technological advancements and launched a mobile application, thereby facilitating their day to day transactions.

See Our Recommendation: Reserve Bank of India to Observe the Lending Rate Mechanism of NBFCs.

The launch of the MANI app is a commendable step taken by RBI to facilitate visually impaired people in identifying currency notes. The user interface of the app is fairly easy and the additional features offered in the app make it more compatible to be used by visually impaired people. Such a step taken by the Reserve Bank of India is highly applaudable, and would certainly aid the users of the app in distinguishing banknotes.

The RBI recently announced the introduction of Internal Ombudsman Scheme for certain categories...

The Reserve Bank has asked all banks to implement the image based cheque truncation system acro...

The Reserve bank vide notification released on April 8, 2021, enhanced the maximum end-of-day b...