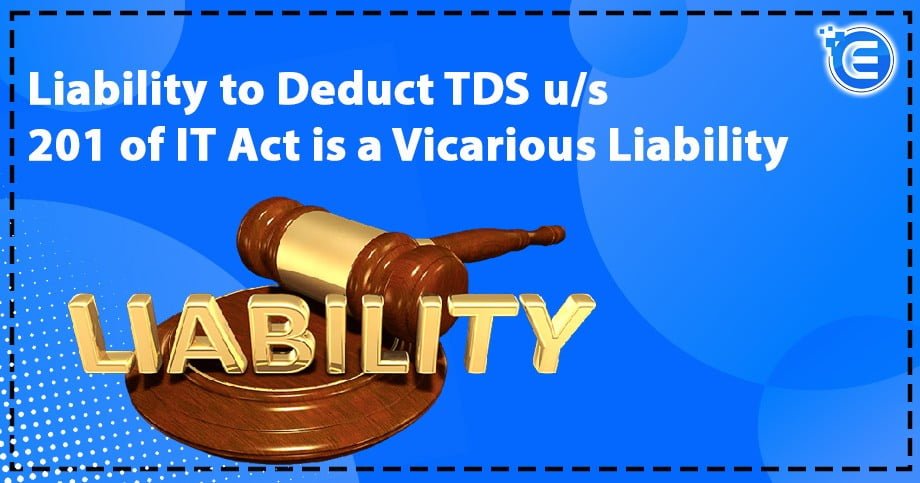 The ITAT Mumbai passed a judgement dated 9th November 2022 in the case titled ICICI Securities Limited versus Income Tax Officer, International Taxation wherein the appellant questioned the correctness of the order dated 19.04.22 which dealt with the tax withholding demands U/s 201 r/w 195 of the Income Tax Act, 1961, for the AY 2015-16. The present article will discuss the facts, issue, grounds of appeal, and the judgement pronounced in the case.

Issue of the Case

Is the Liability to Deduct TDS Under Section 201 of the Income Tax Act a Vicarious Liability?

The appeal was filed on the below-mentioned grounds.

The tribunal held the legal proposition laid by the CIT (A) as incorrect, together with holding that the liability of deducting TDS u/s 201 of the ITA being the vicarious liability of the payer as an income cannot occur in cases where the primary liability of the person receiving the income is discharged.

Further observation of the tribunal was regarding the raison d’être for the existence of a law that provides for the withholding of tax, or TDS for protecting the interests of the revenue. Also, the provisions contained in sec- 201 are merely recovery provisions which are compensatory and not penal in nature. Therefore if there was an absence of any loss being incurred by the revenue, the provisions of Section 201(1) and 201 (1A) can’t be invoked.

Another observation made by the tribunal was regarding the time gap between the transaction date of the sale of shares and paying the advance tax by BNY, wherein it was held that the gap was well within the permitted time for depositing TDS. Therefore the provisions of vicarious liability can’t be invoked in the absence of any shortfall with regard to the collection of revenue due to a lapse in deducting TDS by the assessee, as well as the absence of any delay in the realization of taxes.

The tribunal also considered that the BYN had paid the advance tax regarding the relevant transaction; therefore, a tax withholding demand u/s 201(1) r/w Section 195 of the Income Tax Act, 1961 can’t be imposed on the assessee.

The tribunal quashed the tax withholding liability as raised against the appellant u/s 201(1) along with the interest liability u/s 201(1A) and allowed the appeal of ICICI Bank, i.e. the assessee. The judgement provides the much-needed clarity on the treatment of TDS liability and held that such liability of deducting the TDS as per sec 201 of the IT Act is a vicarious liability; thus, such liability shall cease to exist when the primary liability of the person receiving the income has already been discharged.


Read Our Article: How to file TDS Return?

A Guide to Transfer Pricing Regulat...

As multinational corporations become more involved in economic operations in the country, new a...

An overview of TDS on Professional...

Section 194J of the Income Tax Act, 1961 deals with TDS rules concerning the payments made towa...

What is the Presumptive Taxation Sc...

With effect from 1st April 2017, a new section - 44ADA was introduced for simplifying the tax c...