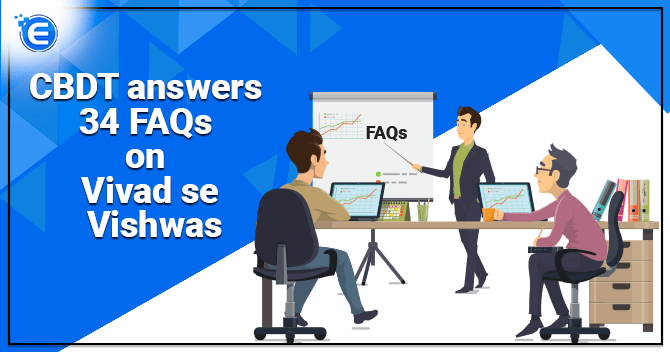 The Central Board of Direct Taxes notified about the clarification on provisions of direct tax Vivad se Vishwas Act of 2020. The board has issued clarifications in the form of questions and answers on some issues related to eligibility, computation of amount payable and procedure and consequences. In this article, we shall take a look at some of the clarifications from the board.

It is expected to reduce the expenditure of litigation for the government and generate revenue. Income tax cases that are arbitrated abroad can also be settled under the scheme.

The Direct tax VsV Act was enacted with an objective to reduce pending income tax litigation, to generate timely revenue for the government and also benefit taxpayers by providing them peace of mind, certainty and savings on account of time and resources that will be spent on the long drawn litigation process.

With a view to facilitate taxpayers, the Central Board of Direct Taxes had issued clarifications on 22nd April 2020 in the form of answers to 55 FAQs on issues relating to eligibility, computation of amount payable, procedure, and consequences under the act.

The board stated that it had received several representations seeking further relaxation and clarifications with respect to such issues. Some of these representations were already addressed via notification dated 27th October and circular dated 28th October 2020.

It may be noted that Section 10 and 11 of the Act empowers the board/central government to issue directions or orders in public interest or to remove difficulties.

The present circular released by the CBDT has been issued in continuation of circular dated April 22 2020 which covered questions 1 to 55 under section 10 and 11 of the Act to provide answers to more FAQs, that is questions 56 to 89.

In this segment, we have discussed few of the 34 questions released by the CBDT.

Can Vivad se Vishwas be availed in case where the enforceability of an assessment order passed by the Assessing officer is stayed by the High Court or the Supreme Court?

Yes, in that case an assessee can file declaration under the Act whether or not the appeal has been filed against the assessment order. The writ/appeal pending in the High Court and the Supreme Court will be required to be withdrawn by the taxpayer. Upon settlement of quantum of appeal, interest, and penalty, if any, shall be waived.

If cross objections filed and pending on January 31 2020 will they be covered by the scheme?

Yes, but the main appeal is also needed to be settled along with cross objections.

If miscellaneous application pending on January 31, 2020 will also be covered under the scheme?

Appeal against assessment order is pending or the time to file appeal against such an order has not expired on 31st January 2020. Assessee has filed application for resolution of the order under Mutual Agreement Procedure. Can Vivad se Vishwas be availed?

Whether enhancement notice issued by the CIT(A) post January 31 2020 is to be taken into account for the computation of disputed tax?

Whether any additional ground filed relating to the appeal is to be considered while computing the disputed tax?

In case where any additional ground has been filed on or before January 31 2020, it will be considered for the purpose of computing disputed tax.

If the immunity from prosecution is for declarant only or also for the director of the company or partner of the firm with respect to the issues settled under the Vivad se Vishwas?

In case where an issue has been settled, the immunity from prosecution to that issue shall extend to the director/partner of the company/ firm in respect of the same issue under Section 278B of the Act.

Yes. When the required amount of disputed penalty is paid by the declarant, the interest relating to such a penalty shall be waived.

After the declaration is filed under section 4 of the Act by assessee, can the same be revised? If yes then at which stage?

Yes, declaration may be revised any number of times before the Designated authority issues a certificate under Section 5(1) of the Act.

This circular on clarification on provisions of direct tax Vivad se Vishwas Act of 2020[1] was released on December 4th 2020. You may refer to the attached circular for better reference.


Read our article:CBDT rejects representations for extension of Income Tax Return Due Date

Black money is the biggest issue faced by the Indian economy. To curb the problems raised by bl...

All you need to know about Tax Audi...

As per income tax rules, certain taxpayers should get their accounts audited under Section 44B...