IT Department acknowledges an error in charging late ITR filing 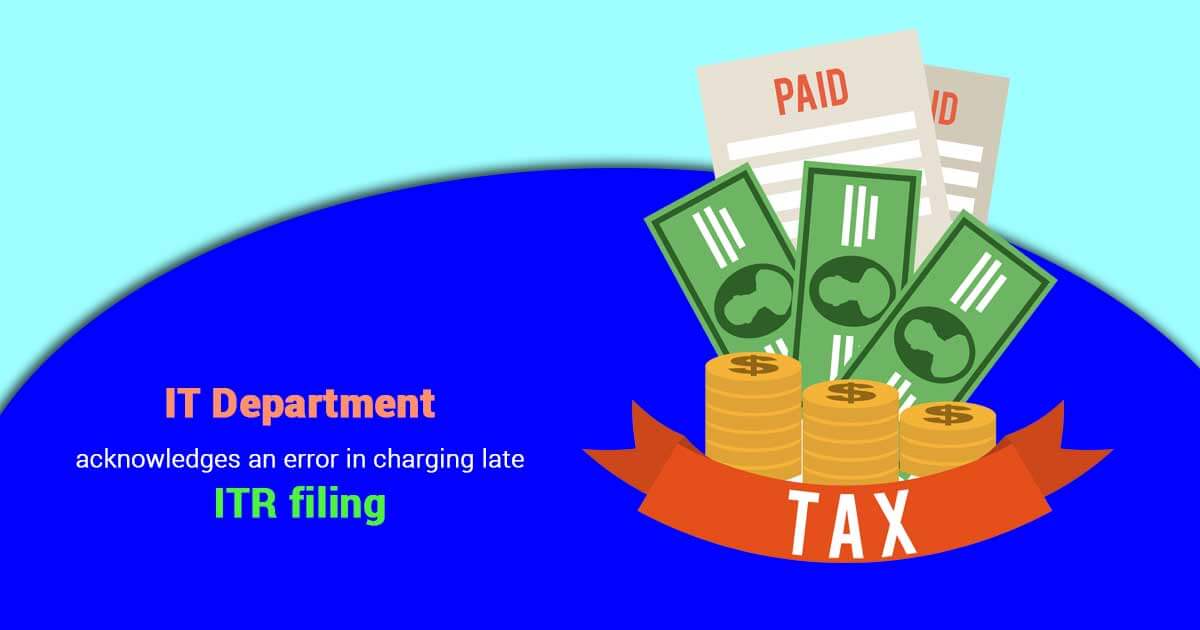 The Income Tax Department admits an inadvertent error in processing ITR filing of partners of firms. If a late ITR filing fee has been charged by error, the amount will be refunded, say the authorities.

The Income Tax Department, in its recent tweet, admitted that there had been an error in processing income tax returns (ITR) of partners of firms whose accounts are liable to be audited. The Department has assured to rectify the errors and remove the late fees charges. Earlier this year, taxpayers were relieved as the last date to file ITR was extended from 31st July to 31st October in some cases. That relief didn’t last long for various taxpayers as numerous Chartered Accountants throughout the country reported the imposition of late fees of Rs 5000 even when the ITR was filed before the deadline. These instances of errors in charging late ITR filing surfaced by CA’s through social media are under the scrutiny of the IT Department.

After this error took place at the Income Tax Department’s end, they tweeted:

“In a few cases, the fee under section 234F has been charged inadvertently in ITRs of Partners due to linkage of filing of Partner’s ITR with the filing of ITR of Firm. The same is being rectified suo moto to remove the late fee charged under the section 234F. The inconvenience caused is regretted!”

Section 234F was introduced to ensure the timely filing of income tax returns. However, this time, the Income Tax Department unknowingly levied the fees on the partners of the partnership firms. Now, after rectifying the errors, Income Tax Authorities have decided to remove the penalty charged under section 234F.

For the financial year 2018-19 (the Assessment year 2019-20) all the working partners of a firm whose accounts are to be audited, were supposed to file their ITR by 30th September 2019. This date was later extended to 31st October. For the people living in Jammu & Kashmir and Ladakh, the last date has been further extended to November 30.

For other individual ITR filers, the last date was 31st July which was later extended to August 31. All persons including individual, HUF[1], company, partnership, firms etc are charged with late ITR filing fees if they are not able to file their returns within the due date.

Penalty charges levied on late ITR filing keeps on increasing with time, once the due date is reached. For those filing ITR after the due date but within 31st December are charged Rs. 5000. The penalty increases to Rs 10,000 for those who file their ITR post-January.

Income Tax Authorities have acknowledged an error in processing the ITR’s of the partner of firms whose accounts are to be audited. The department has assured the refund of late fees charged due to an error. The issue was raised by various Chartered Accountants on social media.

Also, Read: Read about the Penalty for Late Filing of ITR.

How Does International Taxation Ope...

International Taxation is to tax the person’s income which has been earned or accrued by that...

Do Freelancers Need to Pay Tax in I...

Yes, Freelancer also needs to pay the tax in India. Many people don’t like doing a fixed time...

While presenting her second Union Budget, the Hon’ble FM Nirmala Sitharaman unveiled a new in...