Issue of Convertible Notes by Start-Ups 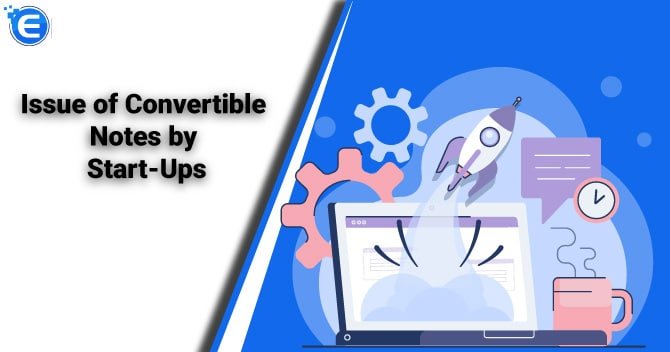 Start-ups are dominating the Indian Market. Every start-up requires capital for carrying out daily activities. Even a start-up would require some form of seed capital or angel investment financing from foreign firms in the world. Foreign Venture capitalists and private equity firms have kept an eye on the start-up environment offered in India. This article is going to speak about the issue of convertible notes by a start-up for raising some form of additional funds.

What is a Start-Up?

The DPIIT (formerly known as the DIPP) has provided the meaning of the term start-up, if the operations of the start-up or company haven’t crossed more than ten years, then the company is known as a start-up.

Apart from this, there are also other criteria which define the meaning of a start-up. If the turnover of the business is less than 100 crores, then the business would be depicted as a start-up company.  The products and services offered by the start-up are also considered in the definition provided by the DPIIT. The primary services or products produced must be in the areas of innovation, technology and commercialisation.

Before this definition, the DIPP considered a start-up as a business which is lesser than seven years old, and at the time of formation, the turnover is about 25 crores.

When did the Government of India bring out the legislation for the issue of convertible notes?

Under the leadership of Narendra Modi, the initiative for Start-Up India and other such initiatives such as technology India have been launched. Apart from the above, the government has launched the scheme for ease of doing business in India. Through this scheme, different incentives are offered to foreign investors and companies that want to generate business in India.

How is the convertible note different from another capital instrument?

Firstly a convertible note has been utilised by start-ups and other companies around the world. The government, with the view of liberalising foreign investment in start-ups, considered that issue of convertible notes by a start-up.

When convertible notes are issued, they would have the features of a debt instrument, that the company will pay the remaining amount to the holder of the instrument.

Equity Shares are normal shares which are issued by an entity or company. These shares can be issued to both domestic investors as well as foreign investors. There are no issues when it comes to the issue of equity shares.

Under the foreign exchange regulations, companies and entities are allowed and entitled to issue CCPS (Compulsory Convertible) and non-convertible preference shares. When it comes to the issue of convertible notes, then they would be treated as debt instruments when issued by a start-up to an angel investor.

Valuation- Apart from these differences, there are also stark differences between the valuation of preference shares/ equity shares and valuation of the issue of convertible notes by a start-up. As per the current valuation theories which are considered, usually, valuation is carried out by a Securities Exchange Board of India (SEBI) certified banker or any other individual who is certified to consider valuation techniques. Apart from this, when instruments are valued, they are considered under international practices which are adopted across the globe.

The pricing guidelines for valuation must be followed for such instruments which are valued at market price or at a fair price which is considered by the parties.

Did Government Allow the Issue of Convertible Notes previously?

While the government gave the nod for companies and other entities to primary issue equity shares, preferences shares, compulsory convertible shares and other forms of shares, there were restrictions when it came to the issue of convertible notes by start-ups. All the instruments which created some form of debt or acknowledgement as a debt would be required to comply with the regulations of FEMA and the External Commercial Borrowings.

Due to this, new start-ups that wanted to raise capital through seed funding and angel investment found it hard to consider these form of investments.  Apart from this, the issue of convertible notes was not considered by the government as they would be treated as some form of Debt under the Companies Act, 2013 and respective companies’ rules.

The above reasons caused issues when it came to raising funds for start-ups. However, the government brought out the permanent solution in 2017 by bringing out the amendment on the transfer of instrument from an Indian entity to an NRI outside India. This amendment was a landmark for all start-ups within India. Apart from start-ups in India, even foreign investors benefitted from this amendment.

Before the government came up with the amendment related to the issue of convertible notes, start-ups and entities similar to start-ups had to depend on other sources of financing. If start-ups secure some form of debt, then compliance has to be maintained as per the requirements under the ECB regulations and FEMA. Many start-ups which were heavily dependent on the foreign investment considered this amendment crucial for the future of start-up India.

What are the conditions for the issue of convertible notes?

The following are the conditions:

The decision taken by the government to introduce the 2017 amendment for the issue of convertible notes by a start-up for foreign investment purposes is a credible one. Start-ups in India have hailed this decision as beneficial to the development of the Indian economy. Prior to this amendment, if start-ups required raising funds, then compliance under the ECB regulations were required. Now only compliance with the respective foreign exchange laws and pricing guidelines are required to be followed by a start-up for the issue of convertible notes.

Read our article:What is meant by FDI Approval Route in India?

A trademark opposition is a legal claim opted by any third party to view the trademark and file...

What are the Income Tax Laws for St...

In order to encourage sustainable economic development in India Government of India came up wit...

In most of the rural areas, dairy farming is the main source of earning a livelihood, and this...