Imports of Cosmetics in India: Analysis of Registration Procedure 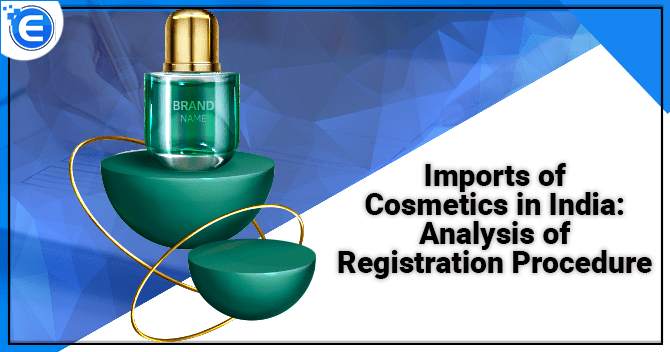 The growth of cosmetic industry in India is expanding at a considerable rate when compared to the European Union and the United States of America (USA). The Ministry of Health and Family Welfare has asked for the cosmetic Registration for importers to ensure the safety of the products which are imported to India.

The government wants to stop the sale of identical products in India. The Indian government wants to abolish imitation cosmetic products in India. This gap is before the guidelines were issued for Registration of Import of Cosmetics. According to a survey carried out in 2015, the cosmetic industry was earning approximately USD 7 Billion. It is estimated that the cosmetic industry will reach USD 20 billion between the years of 2020 to 2025.

New Guidelines for Imports of cosmetics

Eligibility for obtaining Imports of Cosmetics License in India

The eligibility criteria for obtaining the cosmetic license in India are as follows:

The procedure to obtain the manufacturing license for cosmetics in India has been laid down under the Drugs & Cosmetics Rules, 1945[1]. Schedule M-II classifies cosmetics, into 11 broad categories, powder, creams, lotions, nail polishes, lipstick, depilatories, preparations used for eye, aerosol, alcoholic fragrance solutions, hair dyes, tooth powders, toothpaste, and toilet paper. For the manufacture of any of the above-stated products; a license has to be obtained from the licensing authority from the state government.

An application has to be submitted in Form-31 and a license fee of Rs. 2500/- and Rs.1000/- . The only compliance on the manufacturer is the appointment of the qualified person who has at least a pharmacy degree, registered in pharmacy, or at least passed the intermediate exam in Chemistry or any exam recognized by the competent authority.

The following licenses are required for cosmetic product manufacturing & market in India as per the Drugs &Cosmetics Act, 1940-

The cosmetic trademark class 3, it is one of the class amongst the 45 trademark classes which is used by U.S. Patent and Trademark Office, when grouping products or services.

Under which the following goods are classified, it mainly includes goods which are used for cleaning preparations and toilet preparations. It also issues deodorants for human beings, room fragrance preparations, and sanitary preparations being toiletries.

The total GST which has been kept over the Ayurvedic Products is 12%. Whether it is beauty and health, GST remains the same.

Procedure for Imports of Cosmetics in India

There is a defined procedure given under the Central Drugs standard Controller India, where the imported products are registered in India, under the Ministry of Health and Family Welfare.

An application has to be filed with the Central Drugs standard Controller of India.

The application has to be made in Form 42 with a cover letter.

The payment shall be USD 250 fees or which is equivalent to the cost of the imported product.

The office of the Drug Controller shall issue a cover letter which is duly signed which acts as an acknowledgement.

The Registration is valid for 3 years and after which the renewal is necessary to continue the business.

Documents Required for the Imports of Cosmetics to India

The manufacturer requires an IEC number.

This should include the brand name, the date of manufacture, and package sizes which are to be imported in India.

The details of the manufacturing license under which the cosmetics are being manufactured and the country’s details where the sales are carried out.

It has to mention details of the countries where import permission for that product is granted.

It has to mention the names of the ingredients as per the international standards which are accepted as per the percentage contained in the products.

It has to give details about selling in Indian markets. It means that whether the product already being sold in India, and the time period.

It has to be declaration given at the port when the consignment is released that no test has been performed on animals after 12 November 2014 onwards.

It can be concluded that when a dealer imports cosmetics in India few requirements are very important that to be an authorized agent or registration holder support. Apart from this, cosmetic Registration under Form 42 and 43 is important. If there is any amendment in the Registration, the application must be filed with the CDSCO-Central Drug Standard Control Organization. These steps are a necessity for the Cosmetic Registration.

Read our article:License and Permission Required Making Cosmetics in India

All-about Cosmetics: Cosmetic Business is one of the best industries in the world to make a hug...