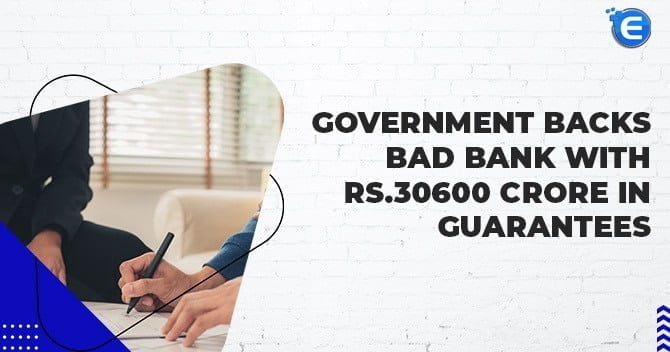 Finance minister recently announced the setting up of India’s first ever bad bank. She said that National Asset Reconstruction Company Limited is already incorporated under the Companies Act. It would acquire stressed assets of about 2 lakh crore rupees from different commercial banks in different phases. Indian Debt Resolution Company Limited will then try to sell the stressed assets in the market. Hence NARCL-IDRCL structure is the new bad bank.

What do you mean by a Bad Bank?

Commercial banks accept deposits and extend loans. Such deposits are the liability of the bank as the money is obtained from the common man, and it should return as and when the depositor asks for it.

The loans that banks provide are their assets as banks get interest, and this is the money that must be returned by the borrower to the bank.

The whole business model is made in a way that banks earn more money by providing loans to borrowers than what it will have to pay back to the depositors. In case a bank is not paid a huge loan that was taken from it due to the reason that the firm that took the loan failed to take off in its business and is now not in a position to pay back the interest or the principal amount.

A case or a two like that may happen, but what would transpire if such bad loans rise to a great extent. It can threaten the stability of the entire economy of the nation.

Therefore two things happen in such cases; firstly, the concerned bank stays less profitable as it has to use an amount of its profits to make up for the loss due to bad loans; secondly, it becomes more risk-averse, meaning the officials are more circumspect when it comes to providing loans to business ventures that may seem risky due to the fear of aggravating high-level of NPAs.

The level of Non-Performing Assets has seen a climb since 2016 in India. It could be due to the RBI requiring banks to clearly recognize the bad loans on their books. From the perspective of a taxpayer, the worrying factor was that majority of the NPAs was with public sector banks that were owned by the government and by the Indian public.

With each passing year, Non-Performing Assets started to increase tremendously, and matters became worse when the economy started to lose its growth momentum after the beginning of 2017.

Many argued that the government should come out with the solution called the bad bank. Bad Bank is an entity where all bad loans can be put in therefore, the commercial banks can be relieved of their stressed assets, thereby allowing them to focus on usual banking operations, especially lending.

Indian Debt Resolution Company Limited is a service company/operational entity that would manage the asset and engage market professional. PSBs and PFIs would hold maximum of 49% stake, and remaining would be with the private sector lenders.

The NARCL shall firstly buy bad loans from banks and would pay 15% of the agreed price in cash, and the remaining 85% would be in the form of Security Receipts. When the assets are sold through IDRCL, the commercial banks would pay the rest.

In case the bad bank is not able to sell bad loan, or if it has to sell it at loss, then the government guarantee would be invoked, and the difference between what the commercial bank had to get and what the bad bank was able to raise would be paid from the 30,600 crore which have been given by the government.

If we look at it from the perspective of the commercial bank with high NPAs, then it will help as the bank can get rid of unwanted assets that were using all the profits. When the recovery money is given back, then it will improve the position of the bank, and it can start lending again.

Other the other hand, from the government and taxpayers’ perspective, the situation looks more addled as whether it is re-capitalizing PSBs with bad loans or providing guarantees for security receipts, the money comes from taxpayers. One of the sustainable solutions could be to improve the lending operation in PSBs[1].

The finance minister emphasized that the issues facing the banking system has been addressed in totality which was a major challenge earlier. Bad Bank is an entity where all bad loans can be put in therefore, the commercial banks can be relieved of their stressed assets, thereby allowing them to focus on usual banking operations, especially lending.

Read our article:A guide to Letter of Credit – Its Features, Advantages & Disadvantages

Tricks to Improve your Credit Score...

Understanding personal finance is an essential skill that is often overlooked. Rarely do they t...