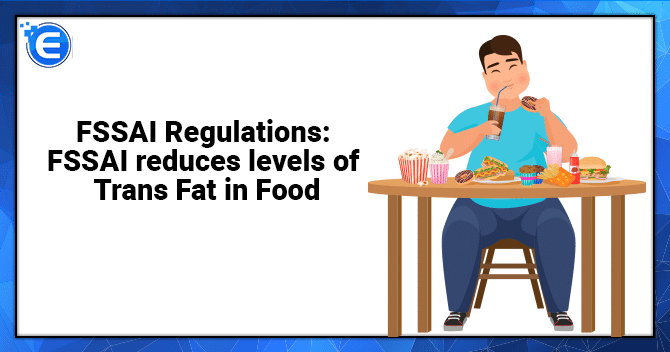 Trans fat, also called partially hydrogenated oils, is created by adding hydrogen to liquid vegetable oil. The process is done to make fat more solid. It also lengthens its shelf life and makes it suitable for frying and suitable for other uses as well.

However, trans-fat is not healthy than regular unsaturated fats because high-density lipoproteins pick up excess cholesterol and transport it back to the body’s liver for processing. Consuming trans fat lowers the level of high density lipoproteins in the body.

Artificial trans fat are created in an industrial process that adds hydrogen to liquid vegetable oils to make them solid. As they are easy to use and inexpensive in production and also the fact that they last for a longer period and provide a desirable taste and texture to food, they are widely used despite the knowledge regarding their harmful effects.

What are the key FSSAI regulations released in regard to trans-fat in food items?

The key FSSAI regulations in this regard are as follows:

What are Industrial Fatty Acids, and what was the need for such FSSAI regulations?

Industrial fatty acids are all geometrical isomers of monounsaturated and polyunsaturated fatty acids that have non-conjugated, interrupted by at least one methylene group, carbon double bonds in the trans configuration. It differentiates trans fatty acids from dairy products, meat products, and fish products.  Industrial trans-fat is produced by adding hydrogen to liquid vegetable oils in order to make them more solid, which enhance their stability at room temperature and extends shelf life.

Trans-fat are present largely in partially hydrogenated vegetable fats/oils vanaspati, margarine bakery shortenings, and it can also be found in baked and fried foods. As per research, higher intakes of industrially produced trans-fatty acids are associated with an enhanced risk of high cholesterol and heart related diseases.

As per the estimates of 2017, every year, more than 15 lakh deaths are reported in India that is attributed to coronary heart disease, out of which close to 5% occur due to the intake of trans-fat. Elimination of Industrial Trans-Fat Acids is recognized as one of the modifiable risk factors that can prevent heart related ailments.

It is important, especially in the current scenario where the Covid-19 pandemic is furthering risk to the people suffering from comorbidities such as hypertension, heart disease, diabetes, etc. In 2018 the World Health Organization called for the elimination of the industrially produced trans fat from the food supply by 2023 and released the action package “REPLACE for it. In order to facilitate the change towards a trans fatty acids free food supply, the food regulatory body, FSSAI, is also building capacities of the industry and, in this regard, concluded a series of webinar on trans fat recently.

The webinar was aimed to target specific stakeholders focusing on challenges faced by them towards shifting to trans fat free products and suggesting practical technological solutions through talks made by national experts and international experts.  The webinar was attended by close to 3,700 participants from the food businesses, edible oil industry, bakers, chefs, hoteliers, sweet manufacturers, food analyst from food analytical laboratories and academic institutions.

What are the other Indian measures to reduce Trans-fatty acids?

Some of the other measures include the following:

Health experts have been of the opinion that all FSSAI regulations[1] should apply to all foods and should not be restricted merely to oils and fats. This step taken by FSSAI, to reduce trans fat in food, has been much appreciated as it would lead to a healthier society in the making.

FSSAI and its Role: Food Safety and Standards Authority of India FSSAI is an agency under the M...

How to Start a Catering Business in...

With the ever-evolving corporates, IT parks, hospitals, schools, colleges, and other businesses...

What is the Process for FSSAI Licen...

An FSSAI/Food License is the single most important license which is necessary for Food Business...