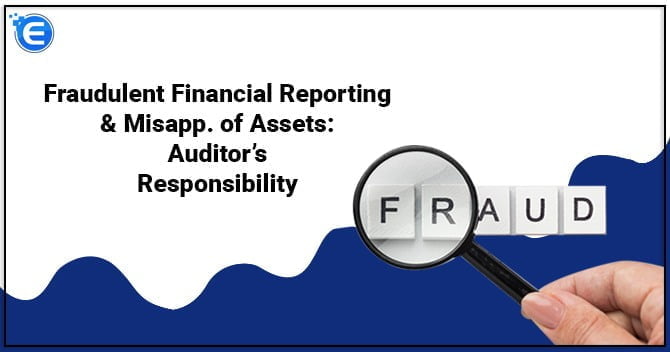 Fraud can be of 2 types- fraudulent financial reporting and misappropriation of assets. You may have also heard of the term fraud risk factors, which means events or conditions that indicate incentives or pressures to commit fraud or provide an opportunity to commit fraud. In this article, we shall discuss auditor’s responsibility in identification of fraud and assessment.

Definition of Fraud as per SA 240

As per SA 240[1], fraud is an intentional Act by one or more than one individual among management, charged with governance, employees or third parties using deception to get an unfair or illegal advantage.

Factors that lead to fraudulent financial reporting or misappropriation of assets

The following factors are responsible:

Why does one commit fraudulent financial reporting?

It can be done to fulfil various objectives such as:

Methods deployed to manipulate financials and misappropriation of assets

There are a number of techniques to manipulate financials and misappropriation of assets, such as:

What is the Auditor’s Responsibility?

The leading auditor’s responsibility is enumerated below:

As specified in the above points, an auditor is required to maintain professional scepticism during the audit. He may find instances that can indicate a possibility of misstatements resulting from fraud during the audit like-

In the context of our above discussion, we should take the case law of Satyam Scam, a scandal that hit the nation during recession. In this case, cash balances on the financials weren’t accurate, and the income was inflated at a vast rate. This case is a perfect example which tells us the importance of following audit procedures. Following audit procedures properly can help to identify manipulated financial statements very early.

The auditor’s responsibility is crucial in identification of fraudulent financial reporting at an early stage. The auditor, during auditing must get reasonable assurance of the fact that financial statements are free from any material misstatements.

Cost Management – The Key for Bus...

In the present competitive scenario for any business to stay active and succeed it is important...

What are Outstanding Receivables an...

Controlling the accounts receivables is one of the major challenges faced by many businesses.&n...

Why CFO should move away from numbe...

CFO is an abbreviation for the Chief Financial Officer.  CFOs are more commonly known as Chart...