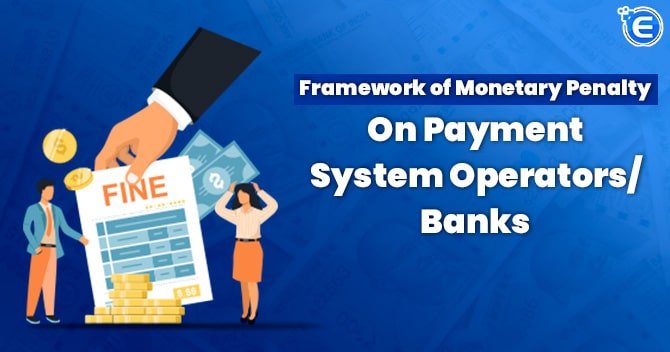 In the past few years the payment landscape has undergone rapid developments with increased adoption of technology, dis-intermediation, availability of payment products, significant surge in turnover, entry of non-bank players etc. With a sea change in payment system landscape, it is encumbent on the part of the government to ensure safe and secure environment and ensure that various stakeholders confirm to the regulatory environment. As a consequence to that, the Reserve Bank of India (RBI) has decided to revise the levy of penalty on payment system operators.

What is the legal framework of penalty on Payment System Operators/ Banks?

Offences and Penalties under Payment and Settlements Systems Act

Sections 26-31 of Chapter VII of the Payment and Settlement Systems Act, 2007 cover the provisions related to the offences and penalties which are punishable fine and/ or imprisonment. Some of the offences committed by the payment systems and payment systems operators under section 26 include acts such as non-compliance of Anti-Money Laundering/ KYC norms, breach of limits in leading prepaid cards, breach of data localisation norms, non- maintenance of minimum net worth etc.

Section of 30 of the Payment and Settlement Systems Act provides for imposition of penalty on payment system operators on making of a false statement or wilfully omitting to make a material statement or contravention of any provision of the act, or defaulting in complying with any regulation, order or direction and also against those provisions where no penalty has been provided.

Highlights of the New Framework:

Given the broadening of the landscape of the fintech industry and more and more players making their way in, compliance with the provisions of the Payment and Settlement Systems Act, 2007 has also increased significantly. By issuing the new framework of penalty on Payment System Operators/ Banks, RBI has itself curtailed a wide range of discretionary powers entrusted on it. This has been seen as a welcome move from the industry as it is expected to increase transparency in the in the regulatory actions in a sector which is heavily regulated.

Digital payments refers to those transactions that are carried out through online mediums, wher...