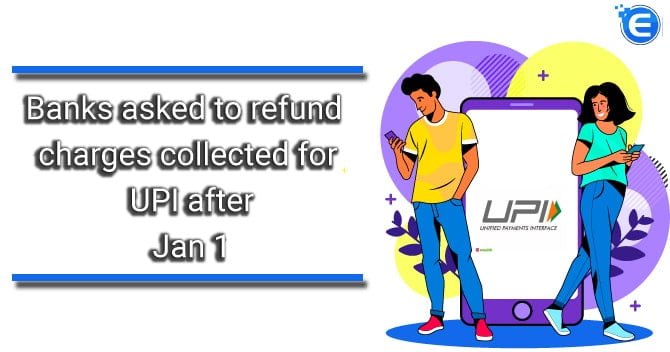 Why were banks asked to refund the charges and not charge customers for making Unified Payment Interface payments?

The regulator noticed that some banks were collecting charges from customers making UPI (Unified Payment Interface) transactions. There are certain transactions that are free and beyond the limit, and banks charge for every UPI payments. The CBDT said that such practices on the part of banks is a breach of section 10 A of the Payments and Settlements Act 2007, and it also violates section 269SU of the Income Tax Act (IT). Therefore the banks were asked not to levy any extra charges for UPI transactions.

In the CBDTs circular released on 30th August 2020, it stated that a new provision, namely section 10 A, was inserted in the Payment and Settlement System Act 2007 that says that no bank or system provider will impose any charge on a payer making the payment or a beneficiary receiving the payment through electronic modes provided under section 269SU of their IT Act.

Another reason behind this move from the regulator is to encourage digital payments in the country. As we know, that government has been increasingly focussing on making India cashless. Therefore various initiatives have been launched to encourage the use of electronic modes for making transactions. If there is no extra charge to be paid on making such payments, it can encourage more people to make UPI payments.

What are those prescribed electronic modes of payments that are referred to in the circular released by the Central Board of Direct Taxes (CBDT)?

The prescribed electronic modes of payments that are referred to in the circular released by CBDT include the following:

This was introduced by the government of India with a view to promoting the cause of financial inclusion in India. It is a mixture of two words, i.e., Rupee and Payment. It is India’s own domestic payment network. The RuPay card was made on the lines of international networks of payments like Mastercard, American Express, and Visa.

UPI is a system that enables multiple bank accounts into a single mobile application, thereby merging many banking features, seamless fund routing, and merchants into one. UPI allows immediate money transfer through mobile phones round the clock 24*7.

QR code consists of black modules that are arranged in a square pattern on a white background. This QR code can be used for proximity payments with UPI. One can simply scan a QR code to make payment of utility bills, fuels, grocery, and several other categories.

Background of the excess charges leading up to the CBDT Circular

It was reported earlier that these private banks had introduced UPI fees during the period of lockdown. The banks stated on their website that customers could only make up to 20 free Unified Payment Interface peer to peer transactions, and if they exceed this limit, they would be charged 2.5 to 5 rupees per transaction on the basis of ticket size.

The Finance Act of 2019 had made it necessary for every business with a turnover of over that 50 crore rupees in the previous financial year to provide a mechanism for electronic payment. Moreover, it was decided that no banks or system providers will impose any charge on a customer using the prescribed electronic modes mentioned above.

Subsequently, in a circular, which was released on 30th December 2019, the CBDT clarified that any charge, including the Merchant Discount Rate, would not be applicable on or after 1st January 2020 on digital payments.

However, banks and National Payments Corporation of India[1] made many representations to the government, citing heavy losses and high cost of infrastructure deployment, seeking a reintroduction of Merchant Discount Rate or compensation for incurred losses. The National Payments Corporation of India estimates this at close to 2000 crore rupees for the payment industry.

In the month of July, the UPI channel touched an all-time high volume of 1.5 billion transactions. Banks like Yes bank, Axis bank, State Bank of India, and Paytm Payment bank processed the most number of Peer to Peer transactions. As per industry sources, Yes Bank, ICICI Bank, Paytm, and Axis bank facilitated most transactions.

What if banks impose charges on any future Unified Payment Interface transactions?

The circular released by CBDT states that there are banks that collect charges for UPI transactions. A certain number of such transactions are free, and beyond the limit, bank levies charge for each UPI payment. The CBDT clearly stated that such practices from banks are a breach of Section 10 A of the Payment and Settlements Act (PSSA) 2007 and section 269 SU of the IT act. Such breach will attract penal provisions under section 271 DB of the IT Act and section 26 of the PSS Act.

This undue imposition of charges on Unified Payment Interface transactions is unethical, and it is indeed a great move from the regulator to act promptly and direct the banks to reverse the charges.

Read our article:How to Start Payment Gateway in India

Casting light on the E-Wallet Busin...

Modern technology has redirected our country’s resources towards a brighter today and to...

Today we are living in the digital era and the entire economy is sustained with digital transac...