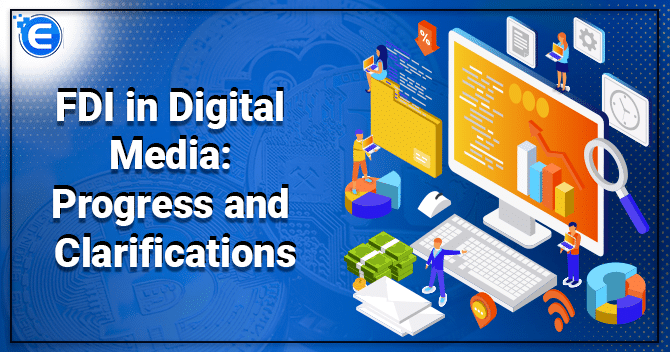 The Government allowed up to 26% FDI in digital media sector. However, this was under the government route. Hence from the above it can be understood that 26% would be allowed in digital media which includes streaming digital news. This article is going to explore the progress of FDI in the digital sector.

Digital Media will include any media which is streamed in an electronic form. This would also include any company or entity which is engaged in uploading and streaming digital news and current affairs. The only requirement under digital media is that the platform used for providing news must be digital.  In Press Note 4, which was issued in the year 2019, there was no concise meaning of digital media.

Due to this there were many concerns for entities that were engaged in this sector. The Government brought out the clarifications on 16 October 2020. Such clarification would answer all the queries that are raised by different forms of entities on the Press Note 4.

Whom will this Clarification on FDI in Digital Media apply to?

The Clarification on FDI in Digital Media would apply to any form of entity that is established and registered in India.

Moreover, this clarification would also apply to companies and entities which are engaged in the following:

What is the compliance requirement for companies using FDI in Digital Media?

Clarifications on FDI in Digital Media

Even though the government brought out clarifications on Press Note 4 issued in 2019, still there was no clarity on few aspects.

The clarification issued by the government did not cover aspects related to location or jurisdiction of upload of digital media. It is not clear whether the aspects of this notification would cover entities which are outside India, though registered in India. Can Companies outside India be considered under the ambit of this form of clarification?

As per this clarification, it would apply to all entities which are established and registered in India. Hence such clarification would also be applicable to branch offices which have FDI in digital media. Hence such branch offices which have recently established would have to comply with the requirements of aligning their FDI to match the 26% requirement.

Another thing which is not covered in this clarification is whether established branch offices which have FDI in Digital Media lesser than 26% under the Government Route require aligning their needs to the clarification. Such companies would require prior approval from the government before going forward. However, one year span of time may be less for such companies to confirm with the requirements of compliance.

Another consideration from the above clarification is in relation to entities such as news channels.  Up to 49% FDI is allowed through the government route for News Channels. Prior approval would be required for FDI allowed through the government route. News Channels also publish content and different forms of current affairs news through digital media. FDI in Digital media would also be applicable to companies which are set up as news channels.

Hence as per the above clarification, News Channels would have to restructure themselves to match the requirements of the clarification. A lot of news channels, have more than 26% FDI from foreign investors. Hence all these companies that come within the purview of the clarification would have to re-align their requirements to meet the criteria of 26% within one year. This would be a tough task to tackle, as restructuring FDI in Digital media for news channels would take considerable amount of time.

As per the above clarification compliance is required to be carried out by the investee company. Hence the company in India has to comply with the requirements of FDI in Digital Media. However, there are stringent conditions imposed along with this clarification. These conditions would be applicable to executives and shareholders in the company.

The following conditions are placed:

Conclusion on FDI in Digital Media

The Government through the recent clarification in October 2020 answered few questioned raised by entities engaged in the Digital media sector. Moreover this, provided clarity to Press note 4 2019. Though these clarifications have liberalised FDI in Digital Media, still FDI compliance is strict as per the government. It is clear that entities engaged in digital media would have to align their FDI compliance as per the clarification. However, there are lot of issues which are left unanswered.

How can a Foreign Entity enter into...

Foreign businesses are showing great interest in the Indian market considering the opportunitie...