FDI from Mauritius: Will finance companies be able to invest in India? 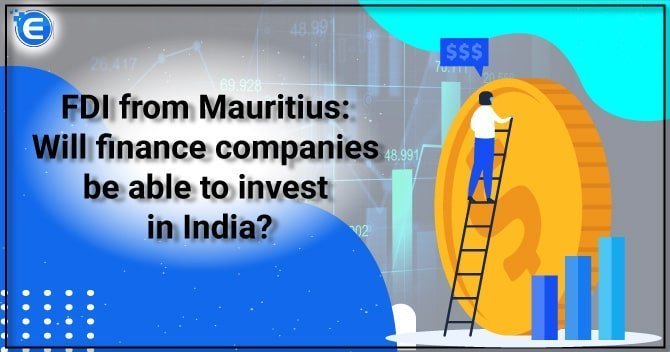 Mauritius is considered one of the hot spots in the world for tourism. A major portion of the Mauritian economy depends on the tourism sector. Apart from tourism, finance companies are established in Mauritius for some time. More amount of investment in tourism in Mauritius has developed the economy and improved the number of finance companies in Mauritius.

Apart from this, Mauritius is considered one of the most suitable jurisdictions for outward remittance from India. Due to this, the opportunities for FDI from Mauritius have increased drastically.

FDI from Mauritius- What is the meaning of FDI and FPI?

FDI is an abbreviation for Foreign Direct Investment. It is a mode of investing in India by a corporate entity or a limited liability partnership which is established outside India. This form of the investment option is largely used by different forms of corporate, private equity funds and venture capitalists.

Hence as per different regulatory authorities, FDI can be understood as a form of foreign investment in a capital instrument of the following entities:

Hence if an investment in India fulfills the above parameters, then it would be considered as Foreign Direct Investment (FDI).

The Reserve Bank of India (RBI) has brought out specific guidelines for the amount of FDI in the country.

There are two routes for FDI in India:

Automatic Route- Under this route, no form of prior approval is required from the Government of India. Any investor under this route can invest 100% FDI in a domestic Indian Company.

Government Route- The Government Route is also known as the approval route. Under this category, a foreign investor requires prior approval from the RBI and the concerned regulatory authority for the investment opportunity in India. Without seeking prior approval, no foreign investment under this route will be permitted. Hence, an investor would require prior approval from the government and regulatory authorities for investment under this route. The DPIIT (formerly known as the DIIP) has provided specific procedures for FDI under the approval route and the government route. Hence any FDI from Mauritius has to comply with the above laws.

FPI is an abbreviation for Foreign Portfolio Investment. A portfolio investment would comprise an investment which is carried out on a pool of securities. Such form of investment must comply with the Securities and Exchange Laws of India. Apart from this, the investment has to comply with the provisions of the Companies Act, 2013 and respective RBI related laws.

Hence, as per relevant authorities, the meaning of FPI would include any form of investment which is carried out by the foreign company in the securities of a company listed in a public stock exchange. The primary regulatory body dealing with FPI investments is the securities and exchange board of India (SEBI).

To be classified as FPI, the following criterion has to be satisfied by the investor:

According to different reports, more than 40% of investment came during the period of 2001 to 2011 from Mauritius. Hence, the above statistics show that a considerable amount of FDI from Mauritius has come in a decade.

Any company can use the FDI route or the FPI route to invest in India. However, if considering the above routes, the investor has to keep in mind the percentage of investment. To be classified as FDI from Mauritius, the investment has to be more than 10 % of the paid-up share capital of the company.

If the investment is lesser than 10%, then it would be construed as FPI from Mauritius. Hence it is important to have a clear understanding of the difference between FDI and FPI.

Ever since the inception of the Financial Service sector in Mauritius, different regulatory regimes have come up related to FDI. To improve the standards of financial credibility, the Government has taken adequate safeguards to bring up the standards to international levels.

The framework followed by the Mauritian Government would be according to the standards of the Financial Action Task Force (FATF) , Organisation of Economic Co-operation and Development and the International Organisation of Securities Commission. All these standards have been brought up to avoid money laundering and other restrictive trade practices such as counter-terrorism financing.

India has entered into bilateral partnerships and reviewed these agreements from time to time to improve the standards related to investment from Mauritius.

At the beginning of 2020, the Bank of China acquired more than 1 % stake in one of the largest national bank of India, HDFC. Because of this, the Government and DPIIT have amended the investment options available to foreign investors.

The following are the amendments brought out as a result of this:

While this amendment was carried out predominantly to restrict any form of hostile takeovers, the decision was welcomed by Indian authorities. Many Chinese firms and other authorities have considered this decision against the principles of WTO and investment rules.

Will these Amendments be Applicable to Mauritius?

As per the rules of FDI, any form of FDI from Mauritius would be allowed in India. These restrictions would only apply to companies that share neighbouring borders with India. Mauritius is a separate country and island which has its own independent identity. Hence, these amendments would not apply to Mauritius.

Are Finance Companies allowed to carry out FDI from Mauritius?

This will drastically affect different forms of financial institutions such as private equity bodies and venture capitalists set up in Mauritius.

The Government and Regulatory Bodies have considered that any form of FDI from Mauritius would be restricted if the requirements are not followed.

Any form of FDI from jurisdictions that do not comply with the rules of the Financial Action Task Force is also not permitted.

These amendments would only apply to any form of a finance company or financial institution present in Mauritius. FDI from Mauritius is not banned from other sectors. Sectors which would not be affected include Non-Financial Sectors, Software Sectors and Other Manufacturing Sectors.

This would be applicable to finance companies that want to carry out foreign direct investment opportunities in India. Finance Institutions are not permitted for FDI from Mauritius. Instead, finance companies can either register themselves with a recognised stock exchange in India to carry out investment through the FPI route. However, under this route compliance has to be maintained with the respective local SEBI regulation and the Companies Act, 2013.

Such restrictions have been brought out for finance companies to curb the amount of leverage brought about through the form of equity investment. Such an investment would apply to public funds.

Why were such amendments carried out to prevent FDI from Mauritius?

Some of the factors which were considered to prevent FDI from Mauritius would be the following:

Other Measures Taken by the Indian Government

As per recent data, Mauritius is considered as a greylisted country under the Financial Action Task Force. Countries which are listed under the grey category are generally not compliant with the relevant international regulations.

If any Finance company receives funding from Mauritius, then such funding would be subject to  restrictions. This would be applicable to any form of Private Equity Company or Venture Capital Company.

All these measures are taken by the Indian government to restrict any form of strategic investment from China. Such investment can be sourced through Mauritius.

Mauritius is one of the largest FDI contributors to India. The RBI recent amendment curbed any form of investment which came from countries that share borders with India. This would not be applicable to Mauritius. However, the government has brought out new rules for FDI from Mauritius. These rules do not allow finance companies to invest in India. This is due to relative Chinese control on the shareholding of the Mauritian entity. The Government brought out these rules to not limit FDI from Mauritius, but only to restrict any form of Chinese investment routed through Mauritius.

Read our article:Types of Foreign Investment in India

FDI in Digital Media: Progress and...

Recently the government brought out a clarification regarding the amount of FDI in Digital Medi...

The Government of India has brought out rules and regulations regarding the amount of foreign d...

In its Global Investment Trend Monitor report, the United Nations Conference on Trade and Devel...