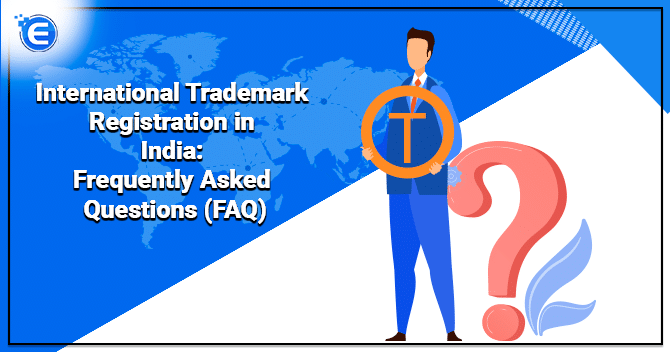 This article describes the view over the frequently asked questions over the international trademark registration in India. The Registration of Trademark is governed by Madrid Protocol. The legislation intends to make the brand safe and secured both nationally or internationally.

An international trademark registration which is a designation for the Registration secured under the Madrid System or Madrid Protocol.

It is a uniform application through a centralized filing system. It is a process, which allows the trademark owner, to register within the various countries, through a single form.

The features of the Madrid Protocol as follows:

Some Frequently Asked Questions over International Trademark registration in India:

Q1. What is a trademark?

The definition of a trademark is well recognized from the standards of an International Trademark.

A trademark is intellectual property with a recognizable sign, design, expression, which identifies the product or the services, of a particular source from the other source.

Q2. What is Registration according to international Trademark registration?

Q3.What are the functions of a Trademark according to the standard of International Trademark?

Q4.  What types of Trademarks are to be registered in India?

Name which is not unusual for a trade to adopt as a mark, (includes, personal, surname of the applicant or predecessor in business, or the signature of the person)

Those words which are not found in the dictionary or non-arbitrary names. They are non-descriptive of the quality of the character or quality of goods or services.

Those letters or numerals or a combination thereof.

It gives the right to proprietorship over a trademark acquired either by Registration, under the Act, or by use concerning the goods or services.

This means that even the combination of colours, or even a single colour, with a word or device.

This means that every shape of goods or their packaging.

This means marks having 3-Dimensional designs

Those sounds which are represented in conventional notation or described in words by being graphically represented.

Q5. How is the International Trademark Registration done in India?

To file the international Trademark, the procedure is as follows:

There has to be a corresponding application to be filed in India for a Trademark.

In a single application under the Madrid Protocol, several countries will be designated which are members of this system

The fees will depend on the number of classes and countries designated.

The fees over the application of trademark can be calculated using the online tool in India, by choosing the office of origin in India, selecting the number of classes, and specifying the colour of the mark

Upon filing the application, the mark is examined by each designated member country, where Registration is sought and then precedes the Registration.

If there is requirement or wish to obtain the Registration in a country which is not a member of the Madrid Protocol, separate national trademark registration has to be filed directly in that country.

Q6. Forms under which Registration is processed for International Trademark Registration?

The Form which is to be used is MM2 – an international application form.

It can be concluded that registering a Trademark internationally, renders the company an exclusive right to commercialize its products in those markets globally. This is a foundation for stopping the counterfeiting of the brand and its consequences. The owner gets the exclusive right as one of the business assets.

The benefits and protection which a registered trademark outweighs the cost of international trademark registration.

Read our article:International Trademark Registration: A Route to Global Branding

How to Apply for Trademark Registra...

A trademark can be registered on name, word, or symbol. Trademark reflects the goods or service...

Trademark gives the owner of the trademark the right to use the mark. It confers many rights up...

With the advent of globalization and economic development from 1992 it has been seen that new b...