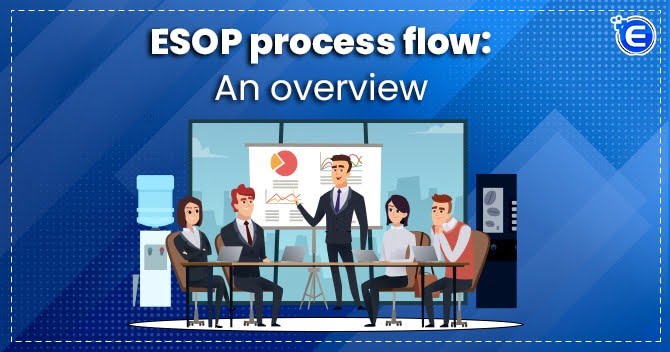 With a view to incentivise employees to work better for the company and also to retain the best performing employees of the company, the companies are nowadays issuing Employee Stock Option Plan (ESOP) to encourage a sense of ownership among the employees. Any company can issue ESOPS. Except for the listed companies, all those companies who wish to issue ESOPs can do so in accordance with the applicable provisions of Companies (Share Capital and Debentures) Rules, 2014 and the Companies Act, 2013. In case of public listed companies, compliance with the SEBI ESOP guidelines is a must. This piece of writing discusses the meaning of ESOP process flow and the process of Issue of ESOP.

What is ESOP process flow?

The process begins with conducting a board meeting where a ‘Compensation Committee’ is constituted to draft ESOP scheme according to the law. Thereafter, approval is taken for the draft ESOP scheme at the board meeting and notice of General Meeting is given to the shareholders. A copy of the ESOP scheme is sent to the Stock Exchange as per the Listing Agreement. A notice is sent for General Meeting and approval for the ESOP scheme is taken from the shareholders via special resolution. Stock Exchange is then provided with a copy of the proceedings at the General meeting. With the special resolution all the required forms are submitted to the ROC. The ESOP scheme is announced at the meeting of Compensation Committee and Board and undertaking is obtained from the concerned employee as per SEBI regulations. The scheme is then filed with SEBI and Chief Commissioner of Income Tax to make it qualified ESOP.

The Register of Employee Stock Option Scheme shall be maintained at the registered office of the company or at any other place as the board of directors of the company may decide.

The entries in the register will be authenticated by the CS of the company or by any other person who has been entrusted to do the job by the board of directors for this purpose.

Can a struck off company get restor...

The Ministry of Corporate Affairs is taking stringent actions against shell companies and non-c...

Maintenance of Books of Accounts: S...

MMaintenance of Books of Accounts is one of the mandatory compliances that every company needs...

Issue of Sweat Equity Shares under...

Whenever an investor invests in the market, he gets certain securities of the company in return...