Highlights of the e-dispute Resolution Scheme, 2022 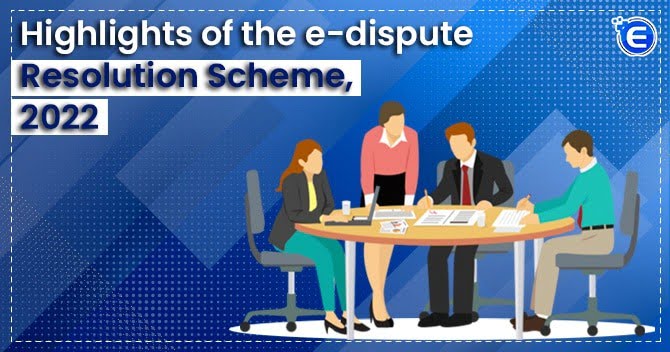 e-Dispute Resolution Scheme, 2022 has been recently launched by the Central Board of Direct Taxes (CBDT) with a view to settle tax disputed of small tax payers. The biggest benefit of this scheme is that small taxpayers are no more required to appear before the tax officials personally or through an authorised representative in relation to any proceeding under this scheme and the entire official communication regarding this scheme will be done in an electronic mode.

Who are eligible to avail the benefits of e-dispute Resolution Scheme?

Those taxpayers who have total returned income up to Rupees 50 lakhs with income tax disputes not exceeding Rupees 10 lakhs are eligible to avail this scheme. The dispute resolution committee shall look into the applications made under Chapter XIX-AA of the Income Tax Act[1], 1961 in respect of disputes arising from any variations in the specified order by such persons or class of persons as may be specified by the Board.

Highlights of the e-Dispute Resolution Scheme

A notification has also been released by the CBDT to constitute a dispute resolution committee which will comprise of three members; two of which will be retired officers from the Indian Revenue Services who have held the post of Commissioner of Income Tax or a higher post for more than five years and the third member of the committee shall be a serving officer not below the rank of principal commissioner of Income Tax.

These members will have a tenure which extends to three years.

Screening of the Application

Powers of the Disputes Resolution Committee

The Eight Essentials of Innovation...

An overview of the 2022 Budget

As always, there have been mixed responses from the industry and people with respect to the cha...

What is the Future of Capital Mark...

A capital market is What comes first when you here a term capital! Normally it refers to financ...