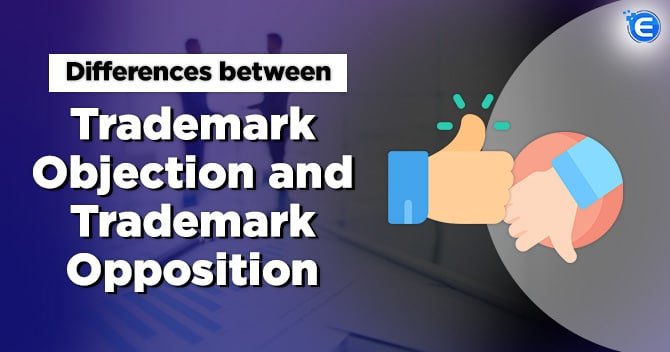 Both these terminologies are different in its meaning and the application of its procedures during a registration process of a trademark. However, people often misunderstand their meaning and may use these terms interchangeably. This confusion may lead them to go for incorrect legal remedy when they have to go through either of Trademark Objection and Trademark Opposition. Therefore, it is invaluable for us to understand these terms. In this article, we shall closely study the differences between Trademark Objection and Trademark Opposition.

A Trademark Opposition is a provision of opposing a trademark after it is published in the trademark journal. An opposition against an intended trademark can be raised by a third party if the Trademark sought for registration is similar or identical to his or her registered Trademark. This provision of opposition prevents a person from using a similar or identical trademark which may create confusion among the public, and it may prevent people from making illicit gain from a similar trademark to the one that is established and popular.

There are some major conceptual and procedural differences in the Trademark Objection and Trademark Opposition. Some of the differences are discussed below:

The bottom-line, thus, is that even after so many differences, one common aspect between the two is that timely filing and proper research are the two ingredients required for Trademark Objection and Trademark Opposition.

There are grounds on which a Trademark Objection and Trademark Opposition can be raised by a trademark examiner and any third party respectively. These grounds are mentioned below:

Grounds for Trademark Objection– Whenever an applicant submits an application for trademark registration, it must be free of any errors or any incorrect information. Some common errors include incorrect details in trademark form or wrong filing of a trademark form. An objection can be raised by an examiner if he finds the intended mark to be in violation of the terms for a valid mark.

It is critical to know that once the reply has been filed, the examiner shall call for hearing with respect to the intended mark that has been objected. Once the examiner is satisfied with the reply to the objection, then only shall he forward the application of the intended Trademark to the next stage.

Grounds for Trademark Opposition– A proposed trademark can be opposed on the grounds if it is similar or identical to an already existing registered trademark. It can further be opposed if it is devoid of any distinctive character. The mark intended must contain distinct character so that it can be easily differentiated from other brand or company.

Another ground for the opposition could be raised if the intended Trademark is descriptive in nature or if the application made for the trademark registration is made in bad faith. If the mark is customary in the present language or if it is in the established practices of business, then it may also be opposed. The mark that either causes confusion among the public or if the mark is contrary to the law or if it is prevented by the law, it may be opposed.

The mark must not contain anything that might hurt the religious feelings of the certain class or section of people. The Trademark intended shall also be not prohibited under the Emblem and Names Act, 1950. All these grounds are good enough to raise opposition against an application for registration of a trademark. Thus, before a trademark is applied for, proper research must be done and the replies, if needed, must be filed diligently and carefully in order to avoid any hassle or wastage of time and money.

The Procedure Followed in Case of Objection

After analysing you must draft a trademark objection reply by providing justification to the Trademark applied for. All the necessary documents and evidence can also be attached with the reply supporting your claim. The response must be filed along with the supporting evidences within 30 days from the receipt of such objection. In case the reply is not filed within the prescribed time, it may cost you your money and time that you invested in that Trademark.

The examiner thereafter may or may not accept the response depending upon the justifications and the filing of the reply. In case of acceptance, the Trademark is published in the journal for opposition from third parties, or else it may be refused altogether for failing to satisfy the conditions.

The Procedure Followed in Case of Opposition

As soon as a trademark is opposed, the applicant should file a reply within two months after receiving such notice. The reply against the opposition is termed as a counter statement. In case an applicant fails to reply within the time period then the application may be abandoned.

The applicant may support his reply with evidence as in the case of trademark objection. The party which has opposed also gets a chance to reply to the claims made by the applicant within the prescribed time period. It is the stage where the opposing party gets the opportunity to refute the claims of the applicant.

The Trademark Objection and Trademark Opposition are two of the important stages of a Trademark. A careful approach and good knowledge about Trademark are invaluable while applying for the registration of a trademark. In case one’s application is either objected or opposed even then he/she should not worry. A strong reply in a timely manner can help you sail through it the various procedures associated with it.

Copyright Registration: How to regi...

Copyright registration is legal protection that ensures no one can misuse the copyrighted effor...

Trademark classification is a platform by which documents pertaining to Trademark registration...

A Trademark is a sign, design or expression which helps in recognizing and identifying a partic...