Dissecting the Difference between SPAC and IPO 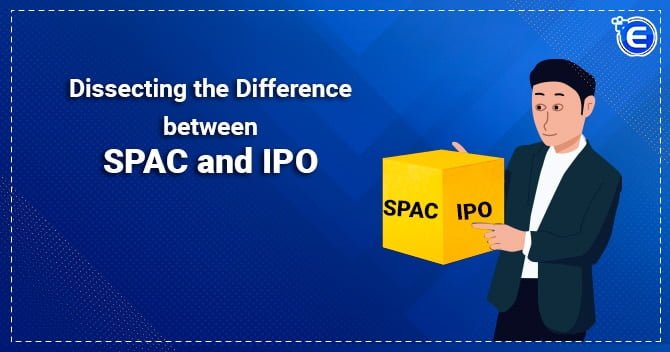 In the business world, there are numerous acronyms that one may come across and in this article we have discussed two of such acronyms, SPAC and IPO. Knowing these terms can be useful for an entrepreneur. SPAC, also called a blank check company, has some commonality with the term initial public offering (IPO), which is a more well-known means of raising capital. However, they have certain differences also which we have covered below.

SPAC[1] stands for Special Purpose Acquisition Company. It is a shell company formed in order to raise capital through an IPO with the goal of acquiring another company. A shell company refers to a company that has little or doesn’t have any assets or any active business operations.

Special purpose acquisition companies have become one of the typical manner for experienced management teams and sponsors to take companies public. Through IPO, SPAC raises capital to acquire an existing operating company. After that, an operating company may merge with (or be acquired by) the publicly traded SPAC & become a listed company in lieu of executing its own IPO. Usually, SPACs are formed by an experienced management team or a sponsor with a nominal invested capital.

Initial Public Offering refers to the mechanism through which a private entity offers shares for sale with a view to raise capital. With IPOs, companies can get listed on the stock exchanges. Also known as “going public,” an IPO converts a private company into public company. Again, the process here is strictly regulated by the Securities Exchange Board of India, which is the regulatory body for securities market tasked with overseeing the stock exchanges.

By issuing IPO, a company raises money from an enormous pool of potential investors. The money is raised by selling the shares of stock in the open market. The transactions are carried out in a specific part of the capital market, which is called the primary market. This is where you get to invest in the IPO. Private businesses issue new securities to sell it to investors that is why the primary market is also called the new issue market. When share of stock are sold by the company on the primary market, it gets the money from each share sold.

Some of the main features of IPO are as follows:

Difference between SPAC and IPO

SPACs and IPOs are distinct in a number of ways. Although through IPO companies traditionally go public however it usually is time consuming because some of the aspects of the process, such as financial audits and regulatory filings, take significant amounts of time. This is why some companies prefer to take the route of SPACs for their listings. Others reasons include avoiding uncertainty in the listing value, having the legwork already taken care of, and the availability of well aware initial sponsors.

The major difference between SPAC and IPO have been specified in the table made below:

Despite the points of differences between SPACs and IPOs, they work towards a common objective that is to ensure that the company is listed on a stock exchange and its shares are available to be publicly traded.

Pros and Cons of SPAC and IPO

SPAC and IPO are two different methods for companies to go public. Each of these process have its own advantages and disadvantages. Companies looking for lower cost of going public opt for SPAC. IPO is a traditional way of listing on a stock exchange, however it takes a little longer in comparison.

Read Our Article: All you need to know about Special Purpose Acquisition Company (SPAC)

Eligibility and Procedure of IPOs...

There has been a buzz going on in the financial market with the upcoming IPOs and India has see...

All you need to know about Special...

Capital markets have been abuzz with the term Special Purpose Acquisition Company (SPAC) these...

Things to Know Before Subscribing t...

This article envisages about the things to know before subscribing to IRFC IPO. The word IRFC I...