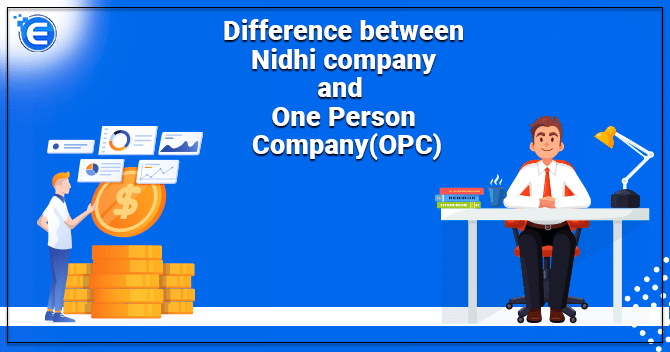 NIDHI stands for National Initiative for Developing and Harnessing Innovations. Nidhi in Hindi means funds or finance. The Nidhi Company is majorly formed to do transactions which involve thrift of funds and reserve funds amongst the members; they also receive deposits and lending to members for benefits.

The transactions of the company are regulated as per RBI guidelines.

SEC 2(62) OF COMPANIES ACT 2013 defines One Person Company as a Company in which there is only one person who is a member/shareholder/director. This one person occupies all the positions.

The nominee appointed has to be a natural person. This natural person will be one who is a resident of India and has Indian citizenship. There has to be written consent of the nominee, and approval has to be given voluntarily.

In order to have a better understanding of the concept that which is a better option, the chart illustrates the differences between the two:

Comparison between Nidhi Company and One Person Company

How to Start a Company in USA from...

A company can be started in the USA either in the form of a ‘Corporation’ or ‘Incorporate...

As we all know, running a business or company is not an easy task, so, to run a successful busi...

Japan is one of the most politically stable countries in the world. It is the 3rd largest count...