Corporate Governance Failures from the Global and Indian Perspective 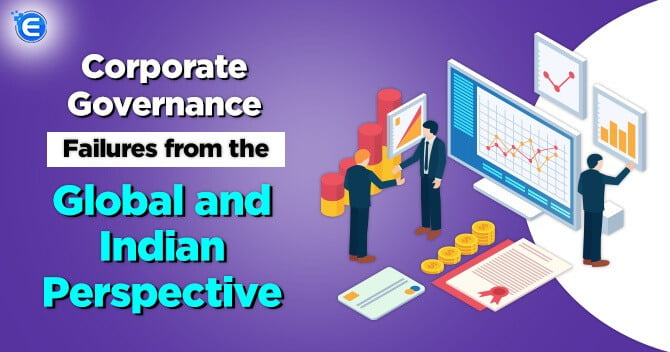 In light of frauds that affect the corporate and securities market, laws must be brought out to handle such debacles. There is a requirement of governance strategies given the number of Corporate Governance failures that happen within an organization. Corporate governance failures will affect not only the economy, but it will also have a critical impact on stakeholders and investors.

Corporate governance forms a causal link between the maximization of the company’s profit and the development of the economy. It also helps in developing a compliance framework for an organization. To continuously monitor this framework, there must be constant checks in place. In this way, companies would comply with the legislation, and there would be fewer amounts of corporate governance failures in society.

After the Great Depression in the USA, the SEC was established to monitor the governance mechanism of securities and the corporate market.  Consider the case study of Enron Corporation (2002). This was one of the largest corporate governance failures which shocked the market and the investors.  Enron Corporation was considered as one of the most modern and innovative organizations in the USA. The corporate executives of this organization considered adopting the motive of perseverance.  The organization also devised specific proactive policies that made the organization reach new heights. In the year 2002, a securities action was brought by the stakeholders of the company for misleading the public. The corporate governance failure, which was brought about by Enron, was led by the management. If there is a proper corporate governance mechanism in an organization, there has to be the requirement of proper compliance. The failure of Enron was the lack of transparency between the management, auditors, directors, and bankers.

Situations which led to the corporate governance failure of Enron

Governance from the management would go down the ladder of hierarchy. The management and auditors of the organization were blamed for falsifying accounting statements.  Some of the factors that led to the failure of the corporate governance strategy of Enron were the following:

At a federal, state, and institutional level, various laws were brought out to investigate the number of failures that affected the markets. One of the essential legislation which was brought out in this area to regulate governance was the Public Company Accounting Reform and Investor Protection Act, known more as the Sarbanes Oxley Act 2002. This act was brought about to restore shareholder confidence in the government of the USA.

Essential Features of this Act

Has the Sarbanes Oxley Act Reduced the Number of Corporate Governance Failures?

In light of the above considerations, the Sarbanes Oxley Act applies to all public companies and companies that are listed in public stock exchanges. This law does not apply mandatorily apply to private companies. Corporate Governance Failures can also happen in private companies. Federal institutions and government would bring out emergency measures that were witnessed in the 2008 global economic crisis. Given this, the Sarbanes Oxley Act has acted as a measure to curb corporate governance failures. However, there is a requirement of constant amendment and innovation of the law. Without this, there will be a large number of Corporate Governance Failures.

Indian markets were liberalized in 1990. The companies Act 1956 (Previous Company Law) was enacted to check into the operation of companies that were established in India. Like the SEC, a securities regulator was set up in India to check the compliance of securities law in India. This institution is known as the Securities Exchange Board of India (SEBI). This was set up in the year 1992 after corporate governance failures like the Harshad Metha scam. Like the SEC, the SEBI acts as a market monitor for listing. All companies that considered public companies must be compliant with the laws related to SEBI.

During the 2008 crisis that had a critical impact on the financial sector, the software sector was also impacted adversely. Consider the case of Satyam Computers. This was one of the largest corporate governance failures in India. The Satyam scandal can be proclaimed as India’s Enron since it was one of the largest information technology giants in the Indian economy. A comparison can be made between the Enron and Satyam scandal, where management executives were involved in deceiving the investors and shareholders.

There were a lot of similarities and differences between the above two scandals. Satyam had its securities listed in the NYSE (New York Stock Exchange), so the provisions of the SOX Act would apply to Satyam. Some of the causes which lead to the downfall of Satyam:

After the Satyam fraud, there were several discussions to bring about a change to the previous companies’ act. The government of India brought out the new companies’ act in the face of the number of corporate governance failures and frauds that occurred.

The enactment of the Companies Act 2013 was a stepping stone in the laws which regulated the corporate culture of India.  This brought out various changes regarding the amount of compliance that is required by the company. Some of the provisions which were enacted are as follows:

Effect of the Companies Act 2013- Has it reduced the number of Corporate Governance Failures?

While the companies act 2013 has brought out sweeping changes in the corporate world, but it has not reduced the number of governance failures in the country. Some of the reasons for this are less compliance and petty penalties which are imposed on the contravening company. To add to this, the enforcement mechanism followed by various institutions in India is slow. In light of this scenario, there is a requirement for stricter rules to be followed by companies in India.  Apart from the need for constant development of the law related to compliance and reporting in India, innovation is essential. Through effective implementation of the above mechanisms, corporate governance failures can be avoided.

See Our Recommendation: What is Listing of Securities in Stock Exchange?.

Co-Operative Banks Extension of Are...

Co-operative banks are small-sized units which are organized in the co-operative sector of urba...

All You Must Know About Semi Closed...

In India, currently in the area of non-cash transactions, the demand for e-wallet, Payment Wall...

“Compound” refers to “Settle a matter by a money payment, instead of any other liability....