All about Condonation of Delay under Section 119(2)(b) 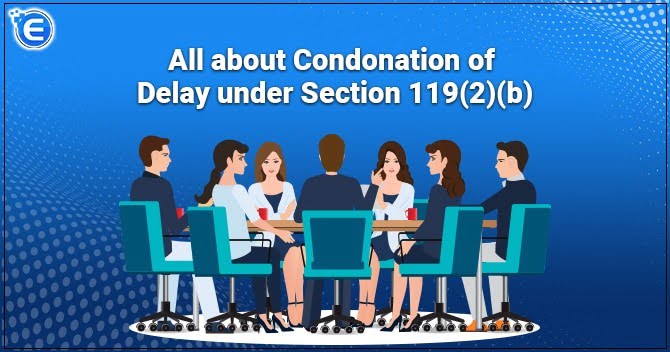 Even the late return must be filed by the end of the assessment year in consideration. For example, the income tax return for the fiscal year ending March 31, 2021, must be filed no later than March 31, 2022. Now, when an assessee is unable to file his return by the close of the relevant assessment year, the question of applying for condonation of delay arises. In general, NRIs and senior citizens whose TDS is deducted and are unaware of the deduction are the most noticeable scenarios in which the issue of filing a condonation of delay arises. Further, tax may be collected at source on a variety of transactions, such as the acquisition of a motor vehicle, and also TDS may be deducted on cash withdrawals.

The CBDT has the authority under Section 119(2)(b) of the Income Tax Act 1961 to authorize any income-tax authority, by way of a general or special order, to acknowledge an application, request, or claim for an exemption, deduction, refund, or other relief under the Income Tax Act after the period specified under the Act for making such an application, request, or claim has expired, and to negotiate with the application or claim on the merits in accordance with the law.

Through its circular no 09/2015, under section 119(2)(b) of the Income Tax Act, the CBDT had issued orders to its subordinate authorities to excuse delays in filing of “refund claims” and “claims of carrying forward of losses”. This circular offers detailed instructions on the grounds for condonation and the procedures to be adopted by such subordinate authorities for making such decisions.

Provisions of Section 119(2)(b) and related circular

According to the CBDT circular, no authority will consider a request for a refund or claim for carrying forward of loss that is more than six years old from the end of the assessment year. For example, Mr. Shyam wishes to seek a refund of Rs. 2 lakh that he missed out on due to his failure to file a return on account of health problems in FY 2017-18 (AY 2018-19) and has decided to file an application with the Principal Commissioner of Income Tax for permission to file his income tax return for the relevant assessment year. He will be able to submit this application at any point between now and March 31, 2025.

To the extent that it appears feasible, a condonation application shall be decided within six months after the end of the month in which it is received by the competent authorities. For example, if Mr. Shyam files a relief application on June 21, 2019, the relevant authorities must accept, close, or reject the application by December 31, 2019.

In the event that a refund claim has arisen as a result of a Court order, the period for which such cases were pending before any Court of Law shall be excluded when evaluating the said period of six years, subject to a condition that such condonation application is submitted within six months of the end of the month in which the Court order was declared or the end of the fiscal year, whichever is later.

The authorities will consider a condonation application for a refund/loss claim if certain conditions are met. First, the authorities must verify that the income/loss disclosed or the refund claimed is accurate, as well as that the situation is one of genuine hardship on the merits. In addition, authorities have the ability to guide the jurisdictional assessing officer to conduct appropriate investigations or evaluate the case in line with the Act’s provisions in order to determine the validity of the claim.

Further, any relief or claim will be granted only if the following conditions are met in addition to the ones listed above:

Who can accept applications?

The CBDT’s circular establishes the monetary limits under which various levels of income tax authorities are authorized to handle these applications.

Though it may be seen in some circumstances when the CBDT or its subordinate bodies went beyond the limits of their authority as set out in section 119(2)(b) of the Act and circular 09/2015.

The rationale of section 119(2)(b) and the related circular can be explained with a case that is recently decided by Honourable Karnataka High Court, in the matter of CBDT and Others vs. Vasudev Adigas Fast Food Private Ltd. In this case, the assessee failed to file a return of income for the assessment year 2014-15 within the time limits set out by the Income Tax Act. The delay was caused by a change in the assessee’s majority shareholding and a disagreement between the former management; the matter was also pending before the Company Law Board. The audited accounts of the company were unable to be approved and accepted on time due to an ongoing dispute in the company’s management.

Because the claim was in excess of Rs. 50 lakhs, the Assessee had filed an application with the CBDT requesting a hold on the filing of the return of income for the year in question. The CBDT had asked its subordinate authorities for a report on the application filed. The delay in submitting the income tax return could be excused, according to the report of the subordinate authorities.

The CBDT had reviewed the assessee’s return on the merits and rejected the application on the grounds that the delay was not due to any external reasons over which the respondent had no control. Furthermore, relying on Circular No. 09/2015, the CBDT denied the application on the grounds that the claim was not genuine, thereby assessing the assessee’s return on a virtual basis. Thereafter, in the year 2018, the assessee filed a writ petition with the court. By issuing an order in the matter, the judge granted the writ petition and quashed the CBDT’s order.

It was held that the components of the phrase “genuine hardship” must be judged in light of the dictionary definition and the legal context around it. It is well-established in law that the term “genuine hardship” should be broadly defined in order to advance the cause of justice.

The Central Board of Taxes (CBDT) has the authority to issue directions to lower-level authorities under Section 119. Furthermore, section 119(2)(b) of the Income Tax Act authorizes the CBDT to direct income tax authorities to grant any claim for exemption, deduction, refund, or other relief under the Income Tax Act, even if the time limit for making such a claim has passed. However, the income tax authority will only allow such claims if the taxpayer’s failure to file a claim by the required deadline was due to circumstances beyond his or her control.

Read our article:Assessing Officer cannot ignore the Valuation Report and adopt a new method of valuation

The government gives 4 months to its citizens to file their Income Tax Returns every Assessment...

Terming the prosecution malicious, the Madras High Court quashed the complaints filed by the In...

ESIC is the acronym form for the Employee State Insurance Corporation. This is an autonomous bo...