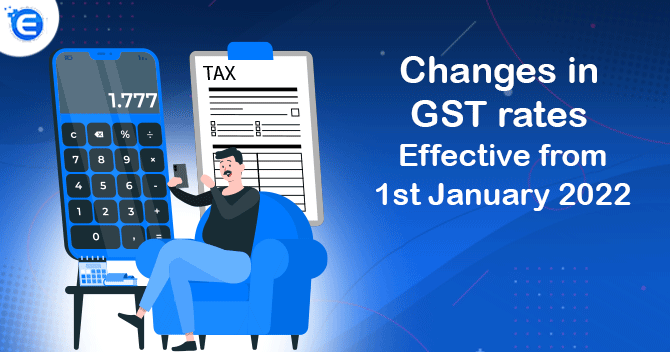 The Central Board of Indirect Taxes and Customs (i.e., CBIC) has recently announced an increase in the goods and service tax rates (GST rates) on different types of textiles, garments, and footwear from 5% to 12%, effective from January 1, 2022.

The government has raised the GST (i.e., goods and services tax) on finished goods such as clothes, footwear, and textiles from 5% to 12%, beginning January 1, 2022. The rise was announced on November 18 by the Central Board of Indirect Taxes and Customs (CBIC). Meanwhile, the GST rates for certain synthetic fibres and yarn have been reduced from 18 percent to 12 percent, according to the notification, bringing in uniformity to rates across the whole textiles sector and eradicating irregularities caused by the inverted duty structure, that is a scenario in which the tax rate on inputs used is greater than the tax on the final product.

Textiles, which include woven textiles, synthetic yarn, pile fabrics, blankets, tents, accessories such as tablecloths or serviettes, carpets, and tapestries, have had their rates raised from 5% to 12%, while footwear of any value has had its rates raised from 5% (up to Rs. 1,000 per pair) to 12%.

The GST Council promised to correct the inverted duty structure in textiles and footwear at its September meeting. It went on to say that the same would take effect on January 1, 2022, but that the effective rates would be determined later.

In addition to raising the GST rates on footwear and textile items having a retail value of less than rupees 1,000, the Finance Ministry has rationalized the tax rate on numerous raw materials used in the manufacturing of textile articles. Such basic commodities will be taxed at 12% beginning from January 1 next year, rather than numerous tax rates ranging from 5% to 18%.

On November 18, the government announced that beginning in January 2022, government agencies will charge an 18% GST on works contract services. The increase would directly affect the cost of major infrastructure projects, and it is likely to result in a conflict between contractors and the government over bill payments based on the revised, higher rates. The GST rate has been raised by 6%; earlier, it was levied at 12%. In addition, the tax rate for subcontractors and primary contractors that provide these works contract services has been raised to 18%.

The hike in GST rates would have a significant impact on all existing and new forthcoming infrastructure projects, including the Metro, Mumbai Trans Harbour Link, and Mumbai’s coastline route, among others. In addition, the government’s housing projects — Pradhan Mantri Awas Yojana–Urban (PMAY-U), a flagship initiative of the Government of India being executed by the Ministry of Housing and Urban Affairs (MoHUA) — may be impacted.

According to the notice, the works contract service that will attract 18% GST will involve principally earthwork (which accounts for more than 75% of the value of the works contract), such as a historical landmark, archaeological site or remains of national importance, archaeological earthworks, or antiquity stipulated under the Ancient Monument and Archaeological Site and Remains Act (AMASR in short), 1958 (Act no 24 of 1958), canal, dam, or even other irrigation works, pipeline, conduit, water supply plants, or passageways.

The likely impact of changes in GST rates

The Clothing Manufacturers Association of India[1] (i.e., CMAI) expressed its displeasure with the government’s proposal to raise GST on clothing beginning from January 1, 2022. The cost increase will have a significant impact, according to the industry association, because the sector is experiencing inflationary pressure due to the rising raw material prices, particularly yarn, packaging material, and freight.

On the other hand, according to experts, the rate modifications would bring clarity to the sector and resolve the challenges generated by the inverted duty structure once and for all.

In an inverted duty structure, inputs are subject to a greater duty than the one applicable to finished products. Because the increased amount of duty paid on inputs is often unutilized or blocked, this causes cash flow challenges for the industry.

The Finance Ministry has notified the GST Council of numerous GST duty amendments authorized in September in order to fix the inverted duty structure in the footwear and textiles sectors beginning from January 1 next year. With this change, all footwear, regardless of their price, and most textile products, including readymade clothing & apparel, will be subject to a 12% goods and services tax (GST) rate effective from January 1.

An Abstract of GST on Joint Develop...

In the real estate industry, a business model known as the Joint Development Agreement (JDA) is...

Disadvantages of Registering under...

The Composition Scheme is simple scheme for taxpayers under GST. Small taxpayers can avoid comp...