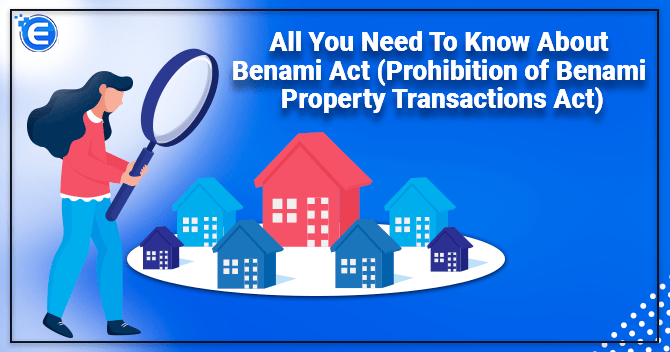 Recently, the government has amended the Act which is known as Benami Transactions (Prohibition) Amendment Act, 2016, which provides government new powers to fight against corruption and black money transactions.

What is Benami Property?

The meaning of Benami is “without a name”. Therefore, properties which people buy but not under their own name are termed as benami properties. People often spend their black money to buy assets in the name of their family members to save their taxes hence the government has amended the Act to curb this illegal practice.

What are Benami Transactions?

Transactions related to purchasing of Benami properties are called Benami transactions. The person who is the owner of the property on paper or the person on whose name the property is purchased is called Namdar. Such property can be of any kind like movable, immovable, tangible, intangible, any right/interest or legal document, etc.

When does a Transaction become Benami?

Identifying of Benami transaction is very difficult as they are usually entered into between relatives, friends, or people having a fiduciary relationship between landlord and tenant, employer and employee or other relationships where there exists an obligation to protect or fear of some loss. This limits the scope of litigation regarding benami transactions.

Below mentioned transactions are benami:

In which case are Transactions not considered as Benami?

What is the need for Prohibition of Benami Transactions?

When a person tries to conceal the original source of his illegal money, it is known as money laundering. Benami transactions enable the player who is the real owner of the property to be hidden while the Benami-dar, who is the ostensible owner, has the property to his name. It has become a popular method amongst the corrupt to invest their black money.

Since the property is not in the name of the real owner, the property is excluded from the total net property held by him. This enables the person to pay taxes in the lower cap than he actually would be liable to pay if he owned the property legally in his name.

Benami transactions lead to concentration of land against the efforts of the state to limit the amount of land to be owned by an individual in order to promote the equal distribution of land.

What are the Penalties for Benami Properties or Transactions?

The person entering into benami transactions is liable for rigorous imprisonment for a period between one year up to seven years, and a fine which may extend to 25% of the fair market value of the benami property.

The Benami Act also specifies the penalty for providing false information to be rigorous imprisonment of six months which can extend up to five years and a fine which may extend to 10% of the fair market value of the benami property.

Who can take Action?

Appeals against the order of the Adjudicating Authority can be made to a three-member Appellate Tribunal within 45 days. The appeal shall be filed in the appropriate form and along with prescribed fees. The Appellate Tribunal has to deliver its order within one year.

When the order of the adjudicating authority becomes final against the person then the benami property shall be confiscated as per the Benami Act and no compensation will be paid. The penalty and prosecution proceedings are initiated as per the Act.

The aim of the Prohibition of Benami Property Transaction Act, 1988 was to prohibit benami transactions and punish those who participated in such transactions as they had become a method by the corrupt for tax evasion, land concentration, and money laundering. Due to various loopholes and no proper notification, it was a failed legislation and therefore new bill to repeal and replace the 1988 Act was proposed before the Parliament. However, the bill failed to pass. An effort was made again in the year 2016 to pass the Benami Transactions (Prohibition) Amendment Bill, 2015. It was successfully passed in both the houses and therefore, the Benami Transactions (Prohibition) Amendment Act, 2016 was enforced on 1st November 2016. The Act is clearer and has stringent punishments for offenders. It also tries to plug in the loopholes of the previous laws.

Real Estate Sector is taking an exceptional plunge year after year. But this real estate sector...

Overview In the past, we have seen or heard reports regarding the inefficiency in the work proc...