What are SEBI Norms for Credit Rating Agencies? 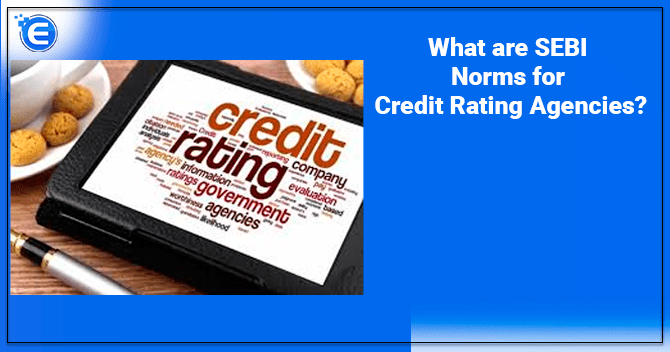 Credit rating refers to the opinion of a recognised entity on the creditworthiness of an issuer or instrument. It is an informed opinion on the relative degree of risk with timely payment of interest. In this article we shall look at various SEBI norms for Credit Rating Agencies (CRA).

What are Credit Rating Agencies?

These agencies evaluates and assess an individual’s or a company’s creditworthiness. It considers the income of a debtor and credit lines to analyse the ability of the debtor to repay the debt or analyses if there is any credit risks.

SEBI has the right to regulate and the right to authorize these agencies under SEBI Regulations 1999 of the SEBI Act. Some of the key CRAs include the following-

What is the need for regulation of Credit Rating Agencies?

Despite the great utility of credit ratings, there have been doubts casted on their reliability and accuracy. Critics believe that these agencies suffer from heavy conflicts of interest as they are hired from issuers themselves to rate their instruments.

It is also a point of debate that CRAs lag behind the market indicators. They believe that though initial ratings are accurate but they don’t maintain adequately updated ratings. However, CRAs defend themselves by saying that this is due to the fact that they present a long term view of repayment prospects.

Despite risks associated with credit ratings, the CRAs were not regulated in developed countries until the global financial crisis of 2007. After the crisis, there was a widespread recognition that CRAs were complicit to the crisis.

As per critics, CRAs failed in estimating the market risk and thus were unable to adjust the credit ratings accordingly. It caused the regulators to review the regulatory framework governing CRAs and bring in more stringent norms for CRAs.

After the global financial crisis, Securities Exchange Board of India set up a committee to review the regulatory framework for CRAs in India. The committee didn’t suggest large scale reforms to this framework as India had one of the most extensive regulatory framework regarding the same and there was not enough evidence of systematic misconduct by CRAs.

However there have been incidents now and then that have raised concerns for the need to have better norms for regulation of CRAs.

In India, CRAs are regulated by the Securities Exchange Board of India. It was one of the first regulators globally to bring about a comprehensive framework for regulating these agencies through SEBI (Credit Rating Agencies) Regulations 1999[1].

Some of the regulations for CRAs cover the areas as mentioned below:

What are the new SEBI norms?

Some of the new norms are as follows:

What are some of the registered Credit Rating Agencies?

As per SEBI, the following credit rating agencies are registered to compute and share credit report/score with financial institutions:

CRISIL stands for Credit Rating Information Services of India Limited. It is one of the oldest agencies that were set up in the year 1987. CRISIL is operational in countries like UK, US, China etc. and of course, India. This agency stepped in to infrastructure rating in 2016.

This is a wholly owned subsidiary of the fitch group. It is infamous for accurate and timely credit opinions on the credit market. It covers corporate issuers, urban local bodies, managed funds etc. Its headquarters is located in Mumbai and other branch offices are located in different parts of the country.

SEBI norms is believed to have enhanced the quality of information made available to investors. SEBI has a comprehensive regime for Credit Rating Agencies in India. However, certain concerns still remain.

Read our article:How to Set Up a Credit Rating Agency in India?

Standardisation of Rating Scales us...

Credit rating agencies or CRAs are the SEBI-registered body responsible for rating any entity's...

Which is the Best Credit Bureau in...

When it comes to lending it is a risky matter. One must be assured of the creditworthiness of a...

How to Set Up a Credit Rating Agenc...

A Credit Rating Agency in India can be set up after SEBI grants the approval for such business....