Updates About TDS on Cash Transactions 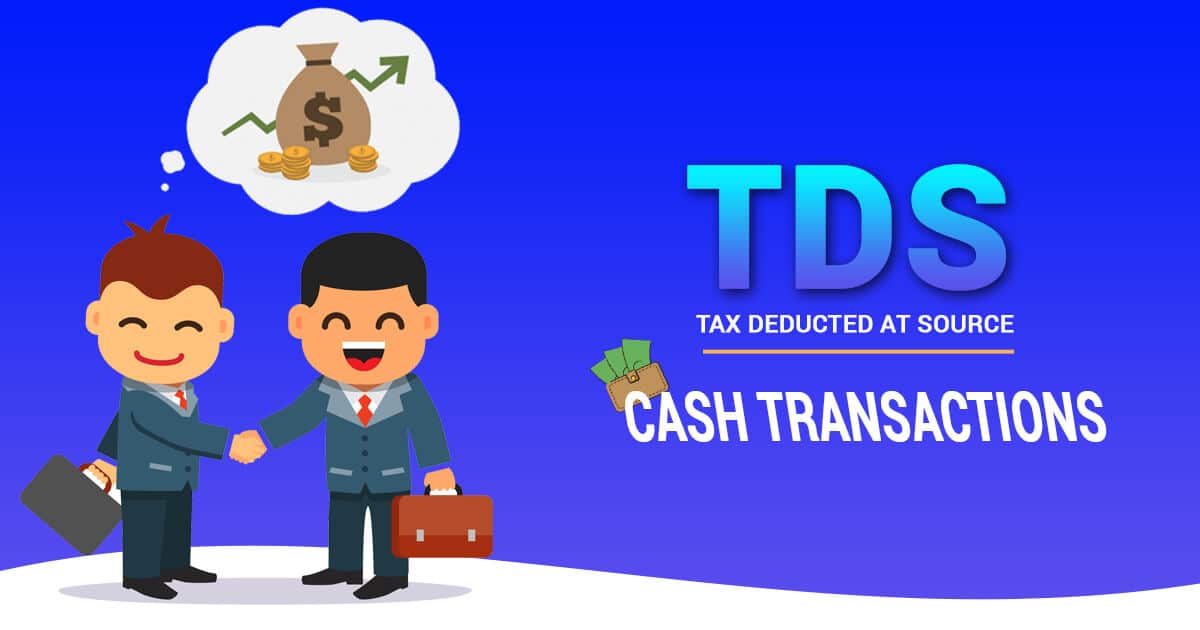 The Central Board of Direct Taxes (CBDT)[1] in its recent notification announced that aforesaid TDS on cash transactions would not be charged on transactions made between 1st April to 1st September 2019.

The notification came as a clarification for questions raised by taxpayers about the newly introduced provision to charge TDS on cash transactions beyond 1 crore rupees in aggregate during a single year. The concerned parties for the provisions are banking company, co-operative bank or post office, making transaction to any person irrespective of the number of accounts used for the transaction.

A TDS of 2% will be charged on the amount exceeding Rs 1 crore. For example, if 1 crore 20 lakh rupees were transacted, then 2 % of 20 lakh will be charged as TDS. The new provision was introduced in the Finance Act 2019 by enacting a new section of 194N under the Income Tax Act, 1961. The new section was aimed to reduce cash transactions in the country, and it is a vital move towards a cashless economy.

The act came into implementation from 1 September 2019. The details of the section have been duly announced the ministry. However, people were still confused about the applicability of the act for the period from the date of announcement to the date of implementation.

The ministry responds by denying the implication of section 194N on the transaction between the dates of 1 April 1, 2019, to 30 August 30, 2019.  However, the threshold limit of 1 crore for the year will include transactions dating from 1 April 2019.

To explain further, If the amount of cash transaction took place between 1 April to 30th august exceeds the 1 crore rupees it will not attract any TDS. However, the if any amount put in cash transaction after 1 September exceeds  Rs 1croe or adds to already exceeded transaction beyond 1crore rupees(Before 1 September 1)then TDS will be charged on the additional amount beyond 1 crore or beyond pre-existing funds which exceeded 1 crore already for the latter.

The implication can we better understood by the following example

Condition 1:
Mr. A received a cash transaction of Rs 1.2 crore between 1 April 1 to 30 August.
Here, Mr. A will not pay TDS for the transactions made before 1 September.

The said TDS will be charged on Rs 10 lakh. The reason for the same is that although the date for calculation of threshold limit is 1 April 1, 2019, the implementation date is 1 September 1, 2019.

Here, the TDS will be charged on the amount beyond the threshold limit. The transaction must add to the exceed the total beyond 1 crore rs, or it should add to the already exceeded amount of Rs 1 crore from 1 April 2019 top A 30 August 30, 2019.

The total now stands at Rs 1.1 crore. Now, the aggregated amount exceeds Rs 1 crore limits for the TDS charge. The TDS will be charged on the amount exceeding Rs 1 crore after 1 September 1, 2019, i.e., Rs 10 lakh.

For any other assistance related to income tax, you can contact industry experts from Enterslice.

A Complete guide on filling ITR‐4...

Recently the Central Board of Direct Taxes notified the instructions intending to help taxpayer...

It has been observed that black money is growing at a higher pace which creates a direct impact...