Why do two stock exchanges exist in India? 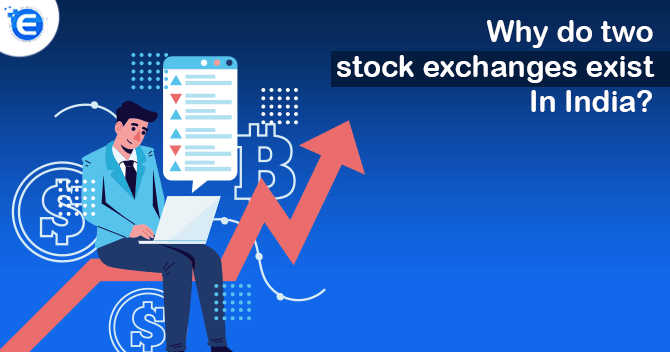 What is a stock exchange?

A stock exchange is a platform where investors meet with the company and other investors and buying and selling of securities takes place and the stock exchange charges a certain fee when the transactions take place when its platform is used.

Why the need arose of two stock exchanges?

The Bombay Stock Exchange is considered to be the oldest stock exchange of India when it was started by a group of brokers under a banyan tree and eventually it got established at the Dalal Street, Mumbai in 1874 and was incorporated in the year 1957. It stood as the sole national stock of India back then.

Following are some of the reasons why the need for two stock exchanges was required.

Reasons that forced the government to set up two stock exchanges

There were many shortcomings in the existing securities trading business during the 1990s. But following are the trigger points that forced the government to think of coming up with a new stock exchange that not only provides competition to BSE in terms of best practices but at the same time restore the investor confidence in the Indian securities market.

All these instances of price manipulations in the market had become too big to be ignored and the government started looking for alternatives to counter the monopoly of BSE in the Indian stock market and this is how the resolve of the government to establish two stock exchanges got firmed.

What took government so long to set up two stock exchanges?

It is wondered that despite so many difficulties existing in the stock market operations, what took the government so long to set up National Stock Exchange in 1992. Following are some of the reasons which can be attributed for the said delay:

Reasons for the success of NSE

The changes and the practices introduced by National Stock Exchange in the securities trading business in 1992 proved to be reformative for the entire industry. Following are some of the reasons that can be attributed for the success of two stock exchanges in India:

All these reasons of success of NSE stamped the necessity of the idea of having two stock exchanges in India.

Before the introduction of good practices by National Stock Exchange, Indian stock market was ranked at the lowest pedestal across the world because of the inefficiencies and the archaic system of functioning of the stock exchanges. Some even commented Indian stock exchanges belonging to the Stone Age era. Initially investors were sceptical about the success of the electronic settlement of their trades. Once, they saw the results, it started building their trust in the NSE and resulted in the increase in the volume of trade. The initiation of NSE by adopting clean practices forced other stock exchanges to mend their procedures and technologically upgrade themselves to get better than other exchanges. This is how the government by adopting good practices in NSE initiated the culture of adopting clean and investor friendly practices in other exchanges.

Read our article:A look at some of the biggest Financial Scams in India

SEBI Circular on Redressal of Inves...

The SEBI is the regulatory body of the financial instruments market in India. It is the apex bo...

The increase in technology dependence has led to major problems in the working of various segme...